Home Ask the Experts When is There a Risk of an Airborne Food Allergy Reaction?

Q: Our allergist tells me airborne reactions are rare, usually occurring with steam from cooking seafood. But on social media, parents often say their children have had airborne reactions to nuts or milk. (My 4-year-old has a dairy allergy, so I’m particularly concerned about steaming milk in the coffee shop.) Can you clarify: under what circumstances can an airborne reaction occur? 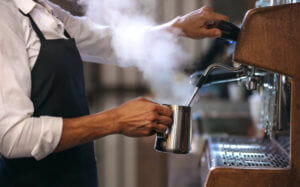 Dr. Sicherer: To trigger a reaction, the food protein has to be disturbed in a way to get it aerosolized. This may occur when milk is steaming, eggs or fish are frying, soup is boiling, shellfish is steaming, or powdery forms are being disturbed, such as when cooking with food flours.

Peanut butter, in contrast, does not aerosolize – same for a glass of milk, or cooled egg or fish on a plate.

The likelihood of a reaction to airborne exposures would depend on two things.

First, it depends upon how much protein gets into the air and onto or into the person with an allergy. There is more exposure to the protein in steaming seafood if you are stirring the pot than if you are several feet away. There is less exposure if there is more air circulation, for example in a large room or outdoors.

Rapid boiling would release more protein than a simmer, and so forth. Being near a person eating peanuts or cracking peanut shells is generally a very low exposure, and unlikely to trigger a reaction.

Second, the resulting reaction, if any, depends on the individual’s sensitivity and whether the person has asthma.

Food exposure through the air is not very different from exposure to other airborne allergens, such as cat dander or pollens. The most typical symptoms affect the eyes and nose (congestion, dripping, itch, redness) or lungs (cough, wheeze).

To sum up, it is uncommon to have reactions from casual exposure from proximity to allergens, and symptoms are typically mild. It would be extremely unusual for air exposure to food proteins to result in anaphylaxis.