Home Ask the Experts Can Someone Develop EoE During OIT Desensitization Therapy? 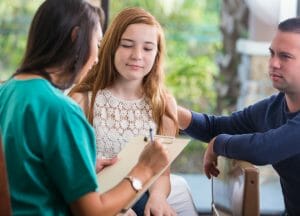 Q: I’m encouraged about oral immunotherapy for peanut allergy and my 13-year-old is considering whether she would take part in a local trial. My biggest concern is: how great is the risk of developing (EoE) or eosinophilic esophagitis, which I’m told can develop during this therapy?

Dr. Sicherer: Eosinophilic esophagitis is akin to having a rash in the esophagus, the tube linking the mouth to the stomach. The illness can result in pain as foods “go down” and foods can even get “stuck”. If untreated, scarring of the esophagus could occur. Food allergy is a significant trigger of EOE, and the condition is treated with medications, with identification and removal of trigger foods, or both.

The rate of EoE varies among oral immunotherapy (OIT) studies and there is uncertainty about the exact risk. Most studies go on for many months or years, and with very close monitoring of participants. It is possible for EoE to have been previously unrecognized or to have developed over the course of a study and just be coincidental to OIT treatment. On the other hand, EoE requires a biopsy for diagnosis and it may be under-recognized even in these studies.

A recent analysis of multiple studies of oral immunotherapy, including only ones that reported any individuals developing EoE, suggested a risk of about 3 percent among those treated.

It is reasonable to expect that if EoE was triggered by ingestion of the treatment allergen, then stopping OIT should resolve the condition. This is typically seen, and fits the observation that individuals with EoE who are not in a treatment trial have remission of the disease when not consuming trigger foods.

While discontinuing oral immunotherapy would be expected to resolve new onset EoE, there is the possibility that the EoE would remain – either because the treatment triggered a more general inflammatory problem or since the problem would have arisen anyway. While we still need more studies to sort out these possibilities, I hope this information will assist your family’s decision.

Related:
All about EoE (Eosinophilic Esophagitis)