Her family said Emma Pfouts was a fighter. Were they ever right.

Emma, the 16-year-old who suffered a severe asthma attack and possibly a severe allergic reaction, has been in hospital for more than three months. In October 2019, she was in critical condition and put into a medically induced coma. Doctors warned her mom Christina Weigand, stepdad Christopher Weigand and family not to get their hopes too high, since Emma had suffered a brain injury.

But the comeback of the popular cheerleader from Norton, Ohio in recent weeks has been nothing short of miraculous.

Emma is now in the rehab program at Akron Children’s Hospital. Her comeback started small: she began opening her eyes and moving a hand, but in the past weeks has progressed rapidly. Now, day by day, Christina says her daughter shows she is getting her personality back.

“She’s starting to talk, starting to move, every day it’s something new with her,” Christina told Allergic Living in a phone interview. “Emma’s just starting to communicate more. She’s smiling and laughing. When people come into the room, she’ll say ‘hi’, ‘thank you’, ‘bye’. She wants to make people happy.”

Christina says the rehab team has been impressed and surprised by Emma’s recovery. “It’s hard for them to set goals for her, because she’s just exceeding them,” her mom said. The teen has even read a few words. When her parents played a video of her cheering with her cheerleader squad on Jan. 23, she began reciting the chant.

Emma has been pushing past the pain and participates in therapy daily. The doctors thought her response time and eye tracking would take a long time, but Christina says Emma is beating all the predictions.

“The doctors said if we give her a command, we’re supposed to take some time to let her process it, but her response time is almost instantaneous,” Christina said. “It’s pretty limitless as long as she’s willing to do it.”

Physically, the teen is gaining strength in her arms and legs. “Just yesterday, she had a breakthrough, she was able to bend her knee on her own,” said Christina.

She added that Emma can pick up her arm to about shoulder height and the medical team is working on range of motion and the ability to grasp. “They’re trying to get her to hold her own toothbrush and washcloth,” she said.

Although Emma has been making progress both mentally and physically, Christina says it will be a while before they know what her baseline is for recovery.

“In the rehab unit, they’re weaning her off the medication she’s been on to see what she’s really like,” she said. “She’s still on a ton of sedating medication so we don’t have a clear picture of how things will be.” Still, Christina says her daughter is in a “really good mood.”

It Began at the Dance

Emma’s medical struggle began at her homecoming dance at Norton High School on Oct. 19. The teen told a friend she wasn’t feeling well and was having breathing difficulty. Emma, who has asthma and food allergies, went to her car to get her inhaler. She collapsed, and school officials called an ambulance and her family.

When Allergic Living spoke to the family in October 2019, they suspected anaphylaxis, but Akron Children’s doctors haven’t determined whether an asthma attack or a severe allergic reaction or a combination was the cause. (As both anaphylaxis and an asthma attack cause breathing distress, it’s not always easy to distinguish between the two.)

At the time, Emma’s prognosis did not look good. “They never said she’d speak, talk, walk, have a thought, she’s done all those things,” Christina told local TV station at a recent basketball tournament at the University of Akron to raise awareness and support Emma.

What a difference only three months later. Today, Emma is defying the odds.

Christina credits the support the family has received from the community and beyond for helping her family and buoying Emma’s spirits. They have seen shirts and other merchandise emblazoned with the slogan “We Roar with Emma,” bracelets with “#EmmaStrong,” and more. Sales of the items are helping the Weigands with medical costs.

“The only thing we ever asked for were prayers and we got an abundance of them,” Christina said. “Medically, she wasn’t supposed to be here in this state. I believe the prayers did that.”

Volunteers with non-profit organization The Giving Doll have been making hand-sewn dolls that resemble Emma for every day that she’s spent in the hospital. At publication time, that was 98 dolls so far. The blond-haired, teal-dressed dolls will be given to child patients at Akron Children’s Hospital in honor of Emma.

Emma’s family feels overwhelmed by the support they’ve received and the kindness of even complete strangers. “We can’t thank everybody enough for how great they’ve been to Emma and our family. We’re so appreciative of that,” said Christina. 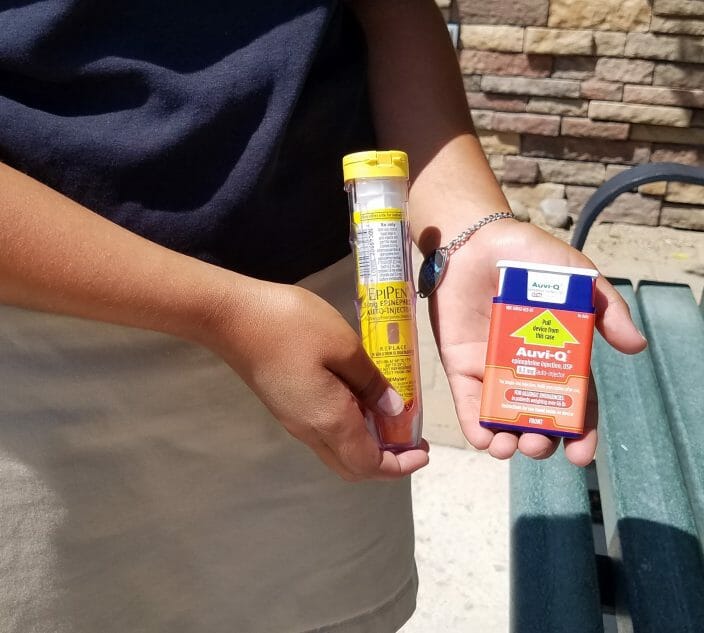