Robin Pompa knows well the life of a food allergy mom. The Connecticut mother of four let her eldest child take a taste of egg when she was a baby. Life changed in seconds. "I gave her a bite of my scrambled eggs and she swelled up like a bawling, red tomato," says Robin, who clearly recalls the ambulance ride and the fear she felt that day.

The new blend, which is mixed into a baby's food, unites food allergy prevention with a healthy diet. The concept behind SpoonfulOne is for parents to introduce diverse, real foods during infancy. But because research shows it's hard for parents to get all these foods in regularly during infancy and toddlerhood, SpoonfulOne ensures they are getting proteins from important potential allergens every single day.

When he was four months, Robin began letting Laurence suck some SpoonfulOne powder off her fingers. He was soon having the contents of the brand's 2-gram packet stirred into his yogurt. Now 13 months old, Laurence has been eating SpoonfulOne daily since. He has not developed any allergies – and clearly enjoys his food.

Robin points out, however, that the early food introduction thinking is still in its own infancy. To any parents who followed the older advice and whose child developed food allergies, she says: "I don't think anyone should feel guilty. The advice changed so recently."

In fact, until the past few years, the medical guidance to parents on allergy prevention was to delay introducing allergenic foods, such as dairy, egg and peanuts. Unfortunately, that advice turned out to be wrong. Over two decades with this guidance, the incidence of food allergies skyrocketed – 5.6 million American children today have food allergies. That's 2 kids in every classroom.

"Pediatricians like me contributed to the problem," says leading pediatrician Dr. Wendy Sue Swanson. "We medicalized infant feeding by advising people to delay foods over years." Not that anyone meant to mislead; the evidence just wasn't there.

That changed in 2015 when, as Dr. Swanson says, "everything turned on its head for food allergy prevention."

There are other studies, too. Such as the large Canadian CHILD study, which found that avoiding milk, egg and peanut until after a child's first birthday increased the chance the child would be sensitized to these foods.

With the EAT study, “it proved that it is safe to introduce multiple common allergens to young infants,” says Dr. Swanson. Among the 1,300 participating babies, there was zero anaphylaxis, and the rate of allergy was reduced in those babies whose moms were able to get 6 foods in each week, in keeping with the study protocol. “Problem was, only a minority of parents could stick to the regimen of introducing all of these foods in a week," she says.

Robin can relate. She loves to cook, but finds SpoonfulOne far more convenient than preparing numerous allergenic foods in baby-friendly fashion. Nor does she have to track which allergens Laurence has had. "That was the biggest thing to me," she says. "Did the child have fish this week? Has he had soy, or pistachio or cashew? How many times this week, and how much? It's a lot to track."

"We're trying to create comfort in families to understand that delay of potential allergens is the risk. Introduction is not," Dr. Swanson says.

California mom KK Sample discovered early introduction for her baby Isabella about a year ago, shortly after she was diagnosed with her own adult-onset allergies to eggs and black beans. At Isabella's 4-month checkup, the pediatrician told KK and her husband they could begin introducing Izzy to solids, including potential allergens. "We were like, whoa, how do we do this?" she recalls.

The pediatrician gave them the confidence to try; then a friend told her about SpoonfulOne. "We started small, with purees. Later, we would just pour the [mix-in] powder into her oatmeal." KK, who doesn't get contact reactions, says her daughter turned out to be "a little foodie."

Isabella, who's now 15 months, has progressed to the brand's flavorful puffs (for kids over 6 months) and oat crackers. "She's obsessed with the strawberry puffs," says her mom.

She is also eating peanut butter. "I don't think I would have been confident giving her peanut butter if I hadn't used the SpoonfulOne product and known peanut wasn't a problem," says KK. "That's been great, too."

In her understanding of the latest research, Robin admits to having a unique advantage. She was dealing with her older kids' allergies while living in England, and was referred to see Dr. Gideon Lack, the LEAP study author. The allergist helped Clara and the two middle boys to successfully navigate oral immunotherapy, and he advised Robin on allergy prevention in babies.

"I was lucky. If my pediatrician had sent me to a different doctor, I would still have three highly allergic children now. And probably Laurence, too," she says.

Robin appreciates that early introduction of potential allergens isn't easy for those with babies considered higher risk. When Robin felt nervous at first about this, she reminded herself that she was doing Laurence a service for life, and that there were no serious reactions in the EAT study.

Dr. Swanson thinks food allergy families are the most likely to relate to the goal of significantly reducing food allergies in the next generation of kids. "They know the lifestyle changes, the anxiety and fears when one of their children has severe food allergies."

"Food introduction is beautiful," Dr. Swanson reminds. "It's fun, it's exciting, kids enjoy it. Parents feel so good when their babies eat. Let's not lose sight of this: eating healthy foods together as a family can be one of the most spiritual and lovely things that we do." 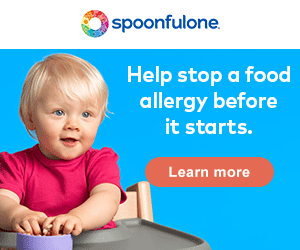