Q: For the second time, our 1-year-old has broken out in hives after eating. And this time was worse – many hives on his face chest and arms. Our doctor is sending us to an allergist and told us to “keep a food diary.” What should go into one, and what other information is helpful for a first allergist’s appointment? 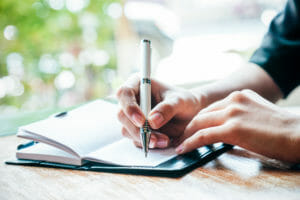 Dr. Sicherer: In general the allergist will be trying to determine if food is a trigger of the hives and if so, which food(s). If food is a trigger, there is typically some consistency to having a reaction when the culprit is consumed.

A food diary could be useful to try to determine which food is triggering hives, when it is not otherwise obvious.

This is important because allergy tests are more useful in confirming a suspicion of a food trigger rather than identifying triggers from a large list – and random testing can result in many positive tests that have no real meaning. The diary should therefore include meals with and without symptoms, noting all ingredients.

Keeping labels and knowing how food was prepared and how much was eaten can also be valuable information. It is more likely that something not routinely consumed is the trigger, so any information from a label about hidden or possible contaminating ingredients should also be collected. (For example, a cookie may have a warning about possible nut contamination.)

However, there are potentially many causes of hives and food is just one possibility. I suggest keeping more than a food diary; also keep a symptom diary that considers additional circumstances. For example, if hives last more than a few hours, the trigger may be something other than food.

Also, a 1-year-old can be a messy eater, and noting that direct contact of food with his skin is triggering hives would be a valuable observation (sometimes a food is tolerated when eaten but causes mild hives on skin contact).

Other things to think about include any signs of illnesses, such as a fever, or physical triggers of hives such as heat, cold, sweating, or exposure to other allergens such as a pet’s dander, or use of medications. It can also be helpful to take photos of rashes to show your allergist because there are both differing types of rashes and triggers.

Related:
Allergist Scott Sicherer Tackles the Crucial Food Allergy Questions
How to Prepare For Your First Visit to the Allergist