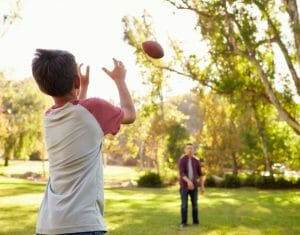 Q: My son goes to high school next year and wants to try out for the football team. But he has peanut and nut allergies and I wonder: is there a risk of him coming in contact with nut residue on the ball?

Dr. Sharma: Having a food allergy shouldn’t limit a teen from living a normal life, so it’s great that your son will be trying out for the football team. As for the risk of a reaction from contact with nut residue, most severe food allergy reactions are actually triggered by ingestion of the food allergen.

That being said, contact exposure to a food allergen can cause localized skin reactions, and less commonly systemic (or widespread) reactions. However, such cases are usually triggered by direct skin contact with a food allergen, rather than from food residue that has been transferred onto an object like a football.

I’m not aware of any studies that have examined the specific risk of this occurring from food allergen contact during sports games, and the risk may vary from person to person.

After discussion with your son’s allergist, you may decide that the potential risk is worth asking the other players to wash their hands or use hand wipes after eating and before heading into the game.

A study by Dr. Robert Wood and colleagues at Johns Hopkins University School of Medicine found that use of hand wipes or washing of hands with soap and water successfully removed peanut residue, while water and antibacterial hand sanitizer did not.

That study also sampled several surfaces in schools, such as desks and tables, and found no detectable peanut protein. That finding, while not conclusive, suggests the risk of exposure to significant peanut residue in public places like schools may be relatively low.

Dr. Sharma is an allergist, clinical researcher and associate professor of pediatrics. He is Chief of the Division of Allergy and Immunology at Children’s National Medical Center in Washington D.C. and Director of the Food Allergy Program. He co-authors “The Food Allergy Experts” column in Allergic Living digital magazine. Questions submitted will be considered for answer in the magazine.