Home Ask the Experts Are Lupine Beans Related to Peanuts? 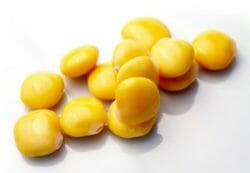 Q: While traveling in France, I had a brioche from a bakery. I’d been assured there were no peanuts in use (I’m a 24-year-old with a peanut allergy). But after eating it, my throat began to tighten, breathing got difficult and I was sick to my stomach. I used my auto-injector and quickly felt better.

I followed up with the bakery, and they swore there was no peanut but did say they use lupine flour, and that some people are allergic to it. I’d never heard of lupine beans or the allergy. Is this linked to peanut? Can I be tested for it?

Dr. Sharma: Lupine (or lupin) beans can be ground into a flour, and this flour is widely used in Europe and Australia for baking.

Recently, there have been increasing reports of allergic reactions to lupine flour in Europe. This has caused the European Union to require lupine to be clearly listed as an ingredient in packaged foods, but it may go unlabeled in over-the-counter baked products, such as the brioche you purchased.

Lupine allergy is linked to peanut allergy in some people, but can also occur in those who are not allergic to peanut. There are skin and blood tests for lupine allergy, though the blood test is more widely available in the United States.

Lupine Beans Can Be Misleading

It’s important to note that many people who test positive to lupine do not react to it upon consumption. For example, a study conducted among 47 children with peanut allergy in the United Kingdom found that 16 (34 percent) had positive skin or blood tests to lupine. Of nine who ate lupine in an oral challenge, only two reacted, giving a minimum prevalence of lupine allergy in peanut-allergic children of 4 percent.

In your case, however, it appears you may have had anaphylaxis to lupine and further evaluation by your allergist is an important next step.

Dr. Sharma is an allergist, clinical researcher and associate professor of pediatrics. He is Chief of the Division of Allergy and Immunology at Children’s National Medical Center in Washington D.C. and Director of the Food Allergy Program.