Home After Tragedy, Brother and Mother are on a Mission for Food Allergy Education 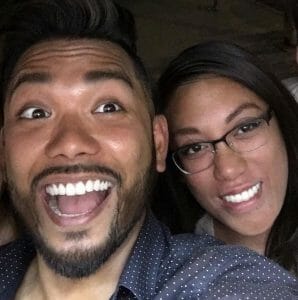 On August 8, 2018, Joanna returned to the home she shared with her parents in Markham, Ontario, with Japanese mochi. The 30-year-old was excited to have found a new self-serve bar for the pastel-colored dessert balls in her local Whole Foods Market.

The popular treats, which Whole Foods had first unveiled in 2017 across the U.S. with great success, are usually made with glutinous rice dough that’s filled with ice cream. What Joanna didn’t realize was that the mochi that Whole Foods was selling contained cashew milk as the main ingredient – and she was allergic to tree nuts, in addition to peanuts and shellfish.

Swiftly, Joanna succumbed to first severe reaction of her life. Despite administering her epinephrine auto-injector, she soon lost consciousness as her mother, Diana Salmingo, who is a nurse, performed CPR compressions, while waiting for the ambulance. Joanna, who suffered brain damage, never regained consciousness and died in hospital on August 24, 2018.

The only other notable reaction the woman, whom Joey Salmingo describes as “an angel, who would give you the shirt off her back,” had was as a toddler. At that time, 27 years ago, an allergen exposure in a grocery store led to an outbreak of itchy hives and later, to an allergist’s diagnosis of her food allergies. 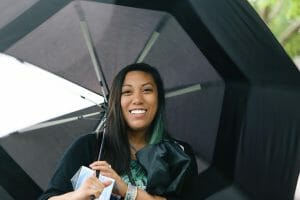 Joanna Salmingo
Despite the Salmingo family’s devastation at Joanna’s loss, Joey and his mother are on a mission to educate about the realities, the risks and the need for readiness with food allergies. They are launching The Food Allergy Training & Education Initiative or FATE – employing Joey’s connections as a U.S. and Canadian TV host with a network of influential food industry contacts, as well as his mother’s own network in the health field. Their aim is to educate – and Joey is even aware of how little he really appreciated about the severity of food allergies until his sister’s fatal reaction.

From the medical aspect, the Salmingos want to get more people trained to do CPR in case of a swift-progressing anaphylactic emergency. Joey fears that people have become over-confident about epinephrine. “We have been conditioned to think of the auto-injector as a reversal or an antidote, it is not,” Joey says based on Joanna’s experience. “It buys you time; you always have to call 911, and a lot of people have reached out and said, ‘I had no idea that you’re still supposed to call 911’ – everybody thinks it’s the antidote.”

In a troubling recent parallel, epinephrine also wasn’t able to counter the fatal reaction of 9-year-old Sadie Bristow. (It should be noted that these tragedies are still the exception; in a majority of cases, epinephrine doses can resolve an anaphylactic reaction, although it is essential to administer before the reaction progresses.) 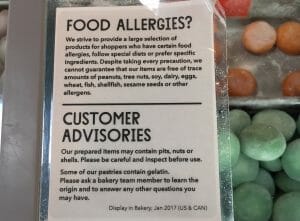 The food allergy label warning on the mochi display at Whole Foods on Aug. 9.
Joey also wants to raise awareness and effect changes in allergen labeling. Like many people with food allergies, he doesn’t think Joanna paid much heed to precautionary warnings, presuming (as he used to) that these were just blanket food industry legal disclaimers. “If she saw a ‘may contain’ sticker, it didn’t bother her because we thought everything had to say ‘may contain’ nowadays legally.”

However, as this was an in-store display, in both Canada and the U.S., Whole Foods isn’t required under allergen labeling laws to label the ingredients. While there are ring-bound ingredients cards available at the display, this isn’t akin to the clear labeling required on packaged foods. Joey thinks his sister would not have noticed the cards, since she would have likely dismissed the ‘may contain’ warning and presumed she knew standard mochi ingredients. “It’s almost always just made of glutinous rice with ice cream on the inside,” he notes. 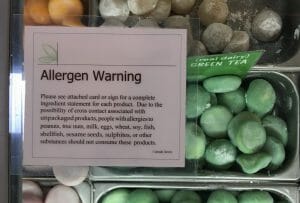 The food allergy label warning on the mochi display at Whole Foods on Sept. 8.
Joey has spoken to Whole Foods global food safety manager, who heard out his concerns and will get back to him. As someone with 15 years in food services industry, “I told him what I think needs to happen. I wasn’t hostile. I said, ‘I’d like to be involved in whatever changes you guys plan to make.'”

When he returned to the Markham Whole Foods store on Sept. 8, the ‘Food Allergies?’ advisory had been updated to a more explicit ‘Allergen Warning’ – which directs those with allergies to read the ingredients statement for each of desserts and warns of cross-contact with top allergens. [Update Sept. 21, 2018: Joey reports in this video that following his conversation with the food safety manager, many U.S. and Canada Whole Foods displays now have full ingredient lists affixed to individual mochi trays.]

Through FATE, Joey also wants to raise awareness so that adults like Joanna, who have lived for years reaction-free, are sufficiently informed and do not grow complacent. “If you’re 30 years old, and you have never experienced an allergic reaction, you’re going to think that you’re OK with it,” he said. “She wouldn’t have used the same knife used for a peanut butter sandwich – she knew better; she was cognizant.”

But ‘may contain’ stickers, he knows Joanna wouldn’t have considered as serious. And what Joey is certain she did not know, was that cashew milk, in this case, was a key ingredient.

As Joey and his mother work to move FATE ahead as a new food allergy training and education resource, the family, including her longtime partner, misses her terribly. Joey describes the digital media college grad as an extremely creative and generous person. “Joanna never got into conflicts with anyone,” he says. “A perfect example is that she and her partner were together for 15 years; they’d been high school sweethearts. She really was our angel.” 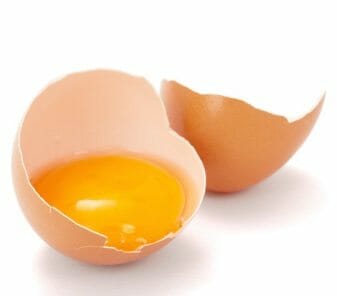 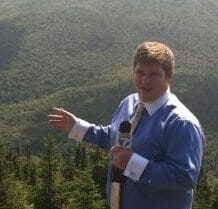