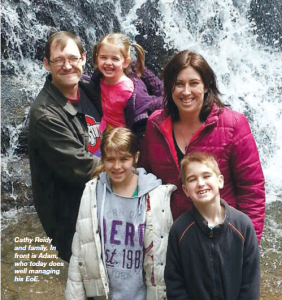 It’s common for parents to fret about young children who refuse food. But Cathy Reidy just knew she was dealing with more than routine pickiness with her second child. “He basically stopped eating and had no interest in food. We were struggling to get him to eat anything,” recalls the Cincinnati mother.

Food issues weren’t new; at six months, the boy had been diagnosed with the food allergies to milk and eggs. But avoiding those two big allergens still didn’t resolve the eating troubles. Now old enough to talk, Adam would lie on the floor and complain that his tummy hurt. “Something just wasn’t right,” says Reidy.

The pediatrician got busy researching his symptoms, and was soon wondering if this could be eosinophilic esophagitis (or EoE for short), a chronic condition where the esophagus can become badly swollen. She referred the family to a gastroenterologist so Adam could have an endoscopy, an examination in which a tube with a camera is placed down the throat, allowing the doctor to take a look.

While inflammation may be seen during this “scope”, several tissue biopsies are also taken and examined for increased levels of one specific culprit – the eosinophil. This type of white blood cell is not supposed to be in the esophagus, but it can infiltrate, leading to chronic inflammation, tissue damage and the eating and health issues that Adam was experiencing. Sure enough, he had elevated eosinophil levels, confirming the disease.

Those dealing with food allergies are familiar with elimination diets, but Adam had to be taken back to an elemental formula diet, which provides essential amino acids but no potentially allergenic proteins. In other words, he was taken off solid food. Then slowly some solids were reintroduced. Ask Reidy what foods her son, now 8 years old, must avoid eating – and she pauses. It’s far easier to say what he can have. It’s about 20 foods, including meats, rice, potatoes, carrots, grapes, strawberries, corn, wheat and soy. She’s proud of those last ones: two top allergens are back in his diet.

Eosinophilic esophagitis is the most common of a group of diseases known as the eosinophilic gastrointestinal disorders or EGIDs. The eosinophil cells are found in the blood and certain tissues, and are designed to defend the body against parasites, viruses and some bacteria. But they also play a role in allergic reactions, and when increased numbers of them appear in the esophagus (which is EoE), stomach, small or large intestine, or in the bloodstream or a specific organ, that’s a problem and one of these disorders.

Of eosinophilic esophagitis, Dr. Marc Rothenberg says: “It’s not a new disease, but it’s a recently recognized disorder.” Rothenberg is the director of the Cincinnati Center for Eosinophilic Disorders at Cincinnati Children’s Hospital, which was the first clinic to focus on EoE in the United States. He and his colleagues saw their initial EoE patient in 1999 and thousands have followed. They and a handful of other medical clinics soon became immersed in discovering more about this emerging condition.

The estimates are that EoE affects between one in 1,000 and one in 4,000 of the population. In children, the symptoms are usually in the upper gastrointestinal tract, and include abdominal pain, vomiting, failure to thrive or the inability to grow.

It’s more common in boys than girls, and is not only a pediatric condition; EoE can develop at any age. Rothenberg, who is an immunologist and molecular biologist, notes that the symptoms in teens and adults are slightly different. A major symptom post-childhood is food getting stuck in the throat – known as food impaction. Other signs are trouble swallowing and heartburn or chest pain.

Young or old, one of the issues with identifying EoE is that the symptoms can be confused with other conditions. Of course, unless you get to the biopsy stage and a specialist sees those elevated eosinophils, you won’t know you have this disease. 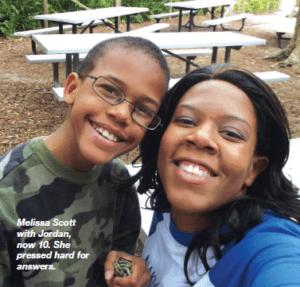 Skin prick tests show that a majority of those with EoE have an allergic predisposition: they’re sensitized to foods or aeroallergens such as pollen and pet dander. Sometimes they may produce IgE antibodies to certain foods and be at risk of anaphylaxis – or often they may simply be be sensitized to specific food triggers.

In either case, in the patient with EoE, high levels of eosinophils in the esophagus are a big factor that may be overlooked as a doctor makes a diagnosis of food allergy or allergic rhinitis. Left untreated, these cause tissue damage and recurring and painful symptoms.

“Unlike food anaphylaxis – the acute allergic reaction – these patients have chronic activation of the adaptive immune system,” says Rothenberg. “It’s typically not IgE and mast cell activation, but chronic, delayed hypersensitivity that’s triggered by the adaptive T-cells which are responding to the food triggers.”

Also unlike food allergies, where you might see an allergy to one or a few foods, “these patients have an intolerance to multiple foods,” says Rothenberg. “The primary defect is that they become sensitized to multiple, major food groups. Most patients are allergic to at least the Top 8 food allergens; they are driving the disease.”

Quality of life naturally becomes a big issue: “not only are they avoiding milk or wheat or peanut, but they have to get rid of all the top allergenic foods. This has a very big impact,” he says.

As much is this isn’t an easy diagnosis to get, not knowing is worse. Melissa Scott had no idea about this disease when her son Jordan first tested allergic to wheat and milk. Those foods were removed from his diet, but symptoms like reflux and diarrhea remained. Most worrisome was that “he didn’t gain weight from nine months to 18 months,” says this mother, an oncology nurse.

The child’s original pediatrician didn’t have answers, so when she moved back to her hometown of Cincinnati, Scott took Jordan to a pediatrician she knew for his 15-month check-up. The doctor agreed there was an issue, and she got a referral to a gastroenterologist.

By that appointment three months later, Jordan had gained an ounce, and rather than scoping to see what was going on, the specialist suggested keeping an eye on him. But Scott was firm: “I am done with the watching and waiting, something is wrong with my child. Your job is to figure that out, and my job is to be sure you do it.” So the scope was done – but the biopsies came back negative; Jordan was not diagnosed with EoE.

His story is fairly typical. In oral food challenges, the child seemed to have gained tolerance to wheat and milk, so these foods were re-introduced. By 4 years old, Jordan was really unwell, and when he was scoped and biopsied again, eosinophils were there in abundance; EoE was diagnosed. The problem had been that wheat and dairy were his two biggest triggers, and with them out of his diet, his disease wasn’t detected in the original scope.

Today, Scott and Reidy lead the Cincinnati Eosinophilic Family Coalition, a not-for-profit organization and support group of about 80 families. They hear from many parents about a long journey to EoE diagnosis. Scott has this advice: “Call it survival of the species, but in the case of almost every parent we’ve talked to, you’ll know something else is wrong with your child. If it doesn’t feel right, trust that, and keep pushing for the answers.”

With the diagnosis, the real work begins. Rothenberg says treatment for EoE usually starts with removing foods from the diet. There are a couple of approaches to this, the “directed diet”, in which skin tests are used to attempt to gauge which foods the patient is sensitized to and to “direct” the food avoidance.

But more common now as an initial step is the Six Food Elimination Diet, in which the patient stops eating all the top allergenic foods – milk, eggs, nuts (peanuts and tree nuts are grouped), wheat, soy and seafood (fish and shellfish). Rothenberg admits that removing so many foods “is pretty controversial. But skin tests haven’t been as successful in inducing remission.” And with EoE, that’s the aim – to stop the inflammation and have the eosinophils disappear from the esophagus. 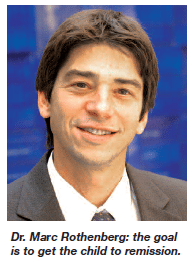 “Skin tests can be useful in terms of adding back foods,” he says, “because the goal is to get the patient to remission, and then start adding foods back, one at a time.” For young children who’ve had growth delay, a specialist may go beyond the Six Food Elimination Diet, turning instead to the elemental formula with no protein molecules to set off the immune system. In Reidy’s son’s case, he was able to drink it but, as it doesn’t taste good and a 2-year-old normally requires 43 ounces a day (or 24 ounces if eating a few solids), some children get their formula through a feeding tube.

Going to the feeding tube, or even just formula, brings issues. Kids have often been on solids, and miss that food and eating. Scott and Reidy tell stories of mothers who hide in the bathroom to eat their own food. “Sometimes, it’s easier than dealing with a tantrum and the demands: ‘Can I have?’ ‘But I want,’” says Scott. “You can’t explain the disorder to a 2-year-old.”

Reidy’s son did quite well with the transition to formula, “except for one evening when it hit him that he wasn’t eating,” she says. “He began panicking, trying to eat anything he could get. There’s that innate feeling of wanting to chew. It was short-lived and once he began to notice he was feeling better, he was fine with just formula.” Today, Adam has his 20 foods and still drinks formula as a nutritional supplement.

EoE treatment options are emerging, and fortunately some patients are responding well to corticosteroids, the medication used in controlling asthma or eczema, but in this case the drug from an inhaler is swallowed. “We bathe the esophagus in that medication, so it is akin to corticosteroids on the skin,” explains Rothenberg.

Experts and families all say there’s a profound psychological side to this disease, and not just because of the level of food avoidance. At least once a year, a specialist will direct families to try adding a few foods back, one at a time, over several weeks or months. Then the patient goes for a new round of scope and biopsy. It can be liberating – or deflating.

“My son trialed blueberries and oranges and was able to eat them,” notes Reidy. “Then he had a scope last winter, and he failed it. So he can no longer eat blueberries and oranges.” It’s confusing to explain to others, and mentally exhausting for the families to do this year after year. “It can wear on the child and the family,” she notes.

While the disease is not life-threatening, Scott says that “it certainly is life-altering”. Yet management of it can make such a huge difference. As with food allergies, once these children are away from their triggers, they can enjoy good health.

Rothenberg speaks of one case in which a 4-year-old with failure to thrive was put on swallowed corticosteroids. To everyone’s amazement, within a couple of months, the child crossed three growth chart percentile lines and was caught up in size. Adam with his 20 foods is also a robust young guy, who’s an active soccer player. As his mother says: “You’d never know anything was different – unless you sat down with him at a table.”

Liked this article? In the magazine, Allergic Living goes in-depth on issues facing the allergy and gluten-free communities, only some of which are posted online. Subscribe affordably here. 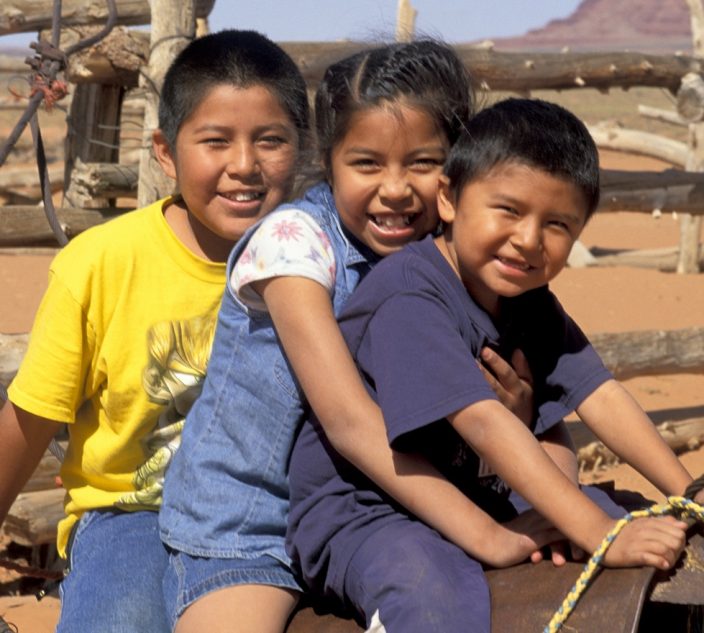 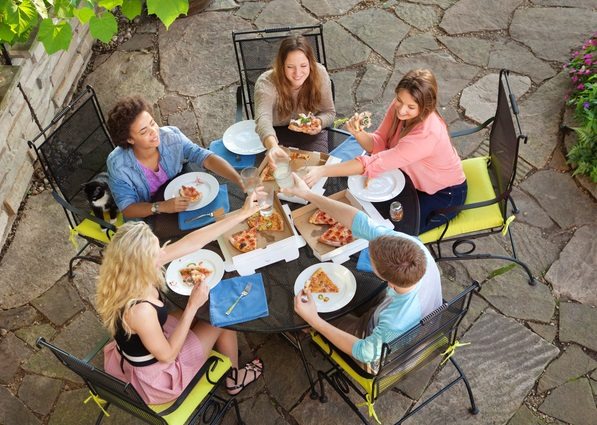 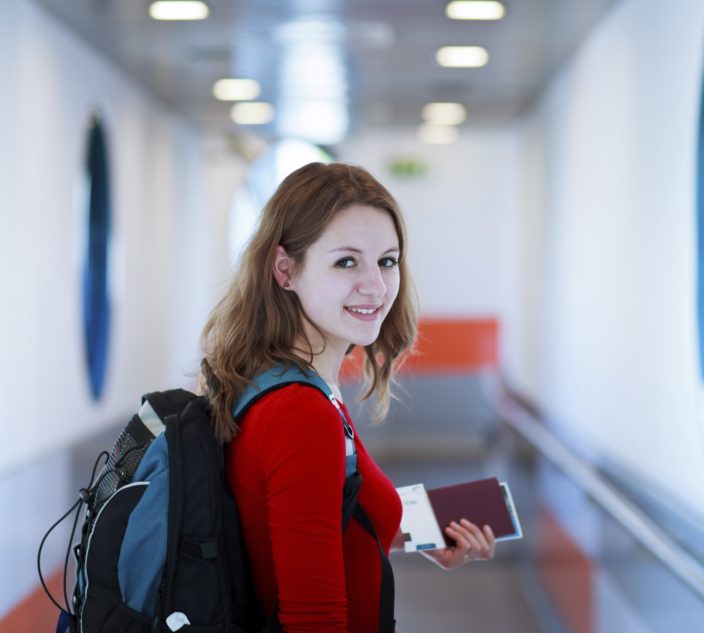 Travel Abroad: Possible After All