Home Asian Americans the Most Negatively Affected by Food Allergies

ALLERGIES to shellfish, peanuts, pineapple and intolerances to other foods made family gatherings and the Chinese festival celebrations difficult for Helen Chu.

Her family’s favorite shrimp dumplings? A nibble as a child before she was diagnosed left her coughing, itching and covered in hives. The delicious dim sum served at so many birthday banquets, weddings and restaurants in her Queens, New York neighborhood? She has to pass.

And the mooncakes that mark the Mid-Autumn Festival? Wheat makes her ill, and she can’t risk the potential for peanut cross-contamination at the bakery. “Food is such a big part of our culture and our community. When you’re not able to participate in that you feel cut off. You feel like you don’t belong,” Chu said.

The sense of isolation from her own community, combined with already being part of a minority group in the U.S., is at times draining, she finds. “As an Asian American, you already feel like you are looked at as an outsider. Physically, emotionally, spiritually, it can become overwhelming.”

Food allergies can cause stress, anxiety and feelings of being left out or socially excluded. Increasingly, research shows that food allergies often have a profound effect on quality of life and psychological wellbeing.

Now a new study reveals a cultural divide, one that’s much as Chu sensed as an individual. The findings show a significantly greater negative impact on quality of life among Asian American families than for white or Black families.

On a scale of 1 to 100, with 100 being the worst impact on quality of life, Black and white parents average score was around 40, while the score for Asian American parents was a 50.5.

The study raises the question of “why” the variance by race of food allergy’s negative effects.

“Foods hold a spiritual, symbolic and cultural role,” notes Dr. Christine Rubeiz, a pediatric resident at Cincinnati Children’s Hospital Medical Center and lead author of the study, which was presented at the virtual meeting of the American College of Allergy, Asthma & Immunology (ACAAI) in November.

“Being excluded from some of these mealtimes or celebrations involving food could be socially isolating for the child, and particularly for the parent who has to constantly have vigilance for the child,” she told Allergic Living.

Although the researchers didn’t ask why Asian Americans rated food allergy as having such a negative impact on quality of life, Rubeiz noted that there may be less awareness of food allergies among immigrant communities.

She cited a study of 18 food-allergic immigrants from East and Southeast Asia living in Canada. Those study participants reported feeling socially excluded in their home countries, and facing misconceptions about the seriousness of food allergies. Several participants reported family members encouraging them to continue to eat their allergen, or to take a bite to prove their allergy wasn’t just in their head.

Among immigrant communities, food allergy skepticism may be more pronounced among older people, who may perceive that food allergies weren’t as prevalent in their country of origin, Rubeiz said.

Chu, who is in her 30s, has experienced this. Her younger friends and family mostly understand why she declines so many foods, but older relatives sometimes mistake this for rudeness or disrespect.

Her family is from Hong Kong, and “seafood is huge part of our cuisine,” Chu said. “When I tell people in my community I can’t eat shrimp, lobster, scallops or clams, they’re shocked. Everything I am allergic to is part of our culinary heritage.”

Growing up, Chu’s family was supportive, but her allergies were hard on them too, she said. With shellfish central to the family’s mealtimes, it was difficult for her family to take it off the menu entirely. “When they wanted their clams or their shrimp fried rice, oftentimes I would just get up from the table and leave,” she said.

In addition to shellfish and peanut allergies, Chu is also allergic to pineapple, has intolerance to wheat and dairy, and does not eat soy. Finding alternatives in Asian cuisine is a challenge.

Many of the Chinese restaurants in her Queens neighborhood say they can’t accommodate her allergies, although a few know her and make her special dishes. Chu has learned to make her own “safe” mooncakes, and has found resources for allergy-friendly Asian recipes.

“I love Asian food. All the wonderful smells and tastes – that’s the taste of home, and comfort food,” said Chu. “To not have it because I’m allergic really hurts.”

Rubeiz recommended that allergists not only screen their patients for food allergy quality of life issues, but take into account culture and cuisine could affect a family’s experience with allergies. “Allergists need to maintain awareness of cultural differences and how that impacts quality of life,” she said.

The researcher says the finding of the negative effect of food allergies on the Asian American community calls for further study and shows this “may be an underrecognized population.”

The impact was the case for both higher- and lower-income Asian American study participants. However, this research also identified a disparity within the population enrolled in Medicaid. Both Black and Hispanic families in that group experienced greater food allergy quality of life effects than white families. With that finding, Rubeiz said “cultural food preferences and the financial burden of food allergy may be a factor.” 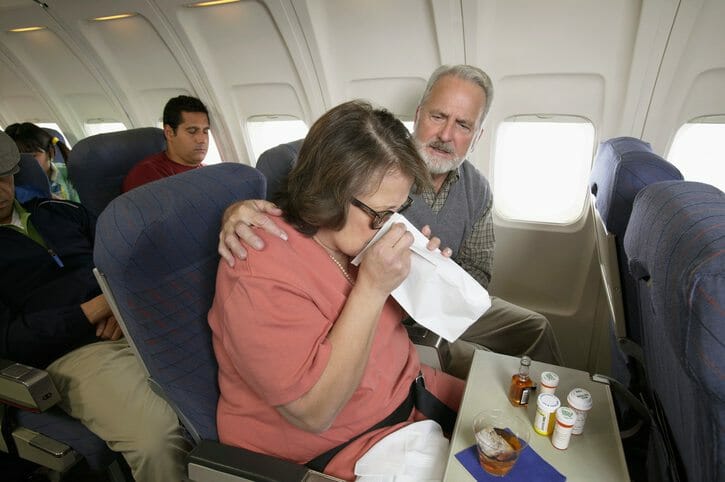 Anaphylaxis in the Skies – Without Your Auto-Injector