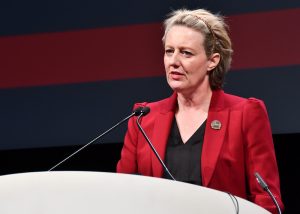 Dr. Cecilia Berin presents at AAAAI 2019. Photo: Karras Photography
The FDA is considering approval of the AR101 peanut immunotherapy and will soon evaluate the Viaskin Peanut patch. But if you wonder what else is in the therapeutic pipeline for food allergy the answer is: plenty. [Editor’s note: Since this article was published, the FDA approved AR101 (now Palforzia), while it requested further study of the Viaskin patch.]

Those attending the presidential plenary session of the AAAAI allergists’ conference in late February 2019 heard a comprehensive overview of food allergy research from Dr. Cecilia Berin, an immunologist and professor at the Icahn School of Medicine at Mount Sinai, whose own research delves into the mechanisms of the food-allergic response. She walked allergists through several novel therapy strategies under study, leaving the audience hopeful for the possibilities ahead.

Following is Allergic Living’s summation of the intriguing options covered in her talk, with additional explanation of the science behind the concepts.

The anti-IgE biologic omalizumab (known by the Xolair brand) has been studied as an adjunct to oral immunotherapy, where it’s used in early buildup phase. Berin notes it’s also now “also being pursued as a standalone treatment for food allergy.”

Omalizumab is one of the monoclonal antibodies (which all end in “mab”) that researchers are designing to target specific proteins involved in causing allergic reactions. In the case of omalizumab, the protein is IgE, the infamous “allergic” antibody.

Berin explained that omalizumab, which is given by injection, “neutralizes IgE antibodies” responsible for the allergic response. Without sufficient IgE circulating in the bloodstream and primed on mast cells, the immune system will not mount a defensive reaction.

Another anti-IgE biologic – ligelizumab – is also emerging. While it hasn’t yet been tested in food allergy, Berin says it likely will be.

She notes, however, that while anti-IgE medication is “very effective” at blocking activation of allergy cells, “it isn’t disease modifying; it doesn’t change the underlying biology driving food allergy.”

Berin spoke of ibrutinib, a drug originally developed as a cancer treatment, as another approach. Researchers at Northwestern University’s Feinberg School of Medicine have published a small pilot study, in which adults with peanut and tree nuts were given ibrutinib for seven days. The encouraging results: there was an average 77 percent reduction in the size of skin hive (or wheal) that developed with skin-prick testing after the week’s therapy.

Ibrutinib blocks Bruton’s tyrosine kinase or BTK, an enzyme that plays a role in B cell production and chemical signaling in the allergic response. (In cancer, BTK has been an effective target in the treatment of B cell lymphomas.) The downside is that when the drug is stopped, testing in the pilot study showed that allergy rebounds to the original level. Berin said: “It has a very rapid onset” of symptom suppression “and a quick washout.”

Given that, how could this therapy be used? If further nut and peanut oral challenge tests prove effective, Berin says it may have potential as a short course of treatment “to improve safety during oral immunotherapy.” (OIT is known to commonly have gastrointestinal side effects.)

Similarly, omalizumab is already being used in early-phase clinical trials of OIT to help suppress reactions to allergens (such as peanut or milk) that are consumed during treatment. Because of side effects observed with ibrutinib in cancer treatments, Berin stressed that safety risks in relation to using the drug in food allergy would need to be closely studied, especially for children.

The basic science of the human production of “high affinity IgE antibodies” is complex, but Berin thinks that several labs are making headway in understanding this process. IgE production is aided by certain helper T cells that retain a “reservoir of IgE memory.” By targeting those helper T cells, she says, “we may be able to inhibit the production of allergen-specific IgE.” 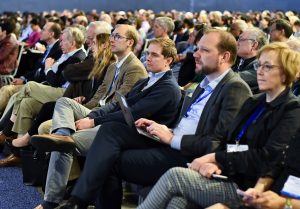 Doctors at AAAAI session. Photo: Karras Photography
In terms of how that’s done, Berin’s noted that helper T cells direct B cells to make IgE (rather than other types of antibodies) to specific allergens. The main cytokine or signaling molecule involved in this is interleukin 4 (or IL-4), which facilitates T cell and B cell communication in an immune response.

A newer “MAB” biologic drug called dupilumab (the brand Dupixent) has been developed to target that communication (as well as another allergy signaling molecule, interleukin-13). Dupilumab binds to the IL-4 and IL-13 receptors and blocks signaling.

In global clinical trials of both moderate-to-severe atopic eczema and asthma, dupilumab treatment led to a significant reduction in the IgE levels in most study participants. The FDA has approved this biologic for those two diseases.

Berin says there are now three trials coming up to test whether dupilumab could be effective in peanut allergy.

One will be for dupilumab as a solo therapy, while two other studies will test the use of dupilumab in a similar fashion to omalizumab – as a therapy to ease the buildup phases of oral immunotherapy.

“This is one really exciting approach where it’s really getting at the underlying immune basis of food allergy,” said Berin.

T helper 2 (Th2) cells also make other cytokines (such as IL-33 and IL-25), which present additional potential targets for allergic disease therapies. “There’s growing evidence that these cytokines play a role in the effector phase of food allergy,” Berin said.

For instance, mast cells express the IL-33 receptor, while Th2 cells implicated in allergy also express it and IL-25. “It’s likely that by neutralizing these cytokines, we may be able to interfere with the pathogenesis of food allergy.”

Berin referenced the research of Dr. Fred Finkelman at the University of Cincinnati, who has been working with monoclonal antibodies against these two and other cytokines to suppress food allergy.

Of studies so far in mice, Berin observes: “neutralizing these cytokines can lead to a prevention of symptoms.”

JAK inhibitors block the activity of one or more of the enzymes in the Janus kinase family. She sees these as a good area of investigation for food allergy, noting: “an advantage of this approach is that they are small molecule inhibitors that can be given orally.”

Berin spoke of the emerging importance of the gut microbiome in food allergy research and potential therapies. She noted that population studies, including birth cohorts, are showing “that the gut microbiota has a different composition in those with food allergy.” The studies indicate this microbial imbalance is “present before the onset of food allergies.”

“So importantly, this is not a consequence of an altered diet or inflammation in the gut,” she said. A good example of this is research showing the difference in the microbial signature between children with persistent vs. transient milk allergy.

She mentioned that some “good bacteria” targets, such as Clostridia, have been identified as helpful to preventing the development of food allergy, while other microbes have a role in regulating the bacterial balance and improving the gut barrier.

In terms of translating this knowledge to therapies, Berin is particularly intrigued by the concept of fecal transplants for food allergy. While that may sound offputting, this work is important. She notes a study, involving peanut-allergic adults and led by Dr. Rima Rachid of Boston Children’s Hospital, is now underway.

The fecal transplant approach “transfers the whole healthy microbial community into the allergic individual” as opposed to trying to determine what elements in that bacterial community are protective. While a “crude approach,” Berin says it might well be effective, since “it is transferring the whole community of microorganisms.

Companies and experts are trying to identify individual protective organisms, such as Clostridia, as well as cocktails of helpful microorganisms or more traditional probiotics. While a field that’s in its infancy, “I think there’s a lot of very exciting data that’s going to come out of this approach,” she said.

There are even more advances in this active area, and Berin mentioned just a few of the more important ones.

In terms of allergen immunotherapy, there are approaches to chemically modify allergens and the potential for a peptide vaccine (also presented at the conference). She notes that another emerging means of immunotherapy is the addition of an adjuvant (or modifying ingredients) to reset the immune response away from Th2 (the allergic mode) and to Th1 (the healthy, non-allergic mode).

An example of this would be the nasal spray vaccine being researched in peanut allergy at the University of Michigan (the adjuvant here is a soy oil-based emulsion). There are also purified microbial adjuvants under study.

Berin’s conclusion: She notes there are safety questions for many of these treatments, especially in young children, plus questions of whether some therapies will work in teens and adults. But she calls it a robust pipeline, with many therapies ready to go into human studies.

“Ten years ago, we had very little in the pipeline and, in contrast now, we have a wealth of potential approaches.” 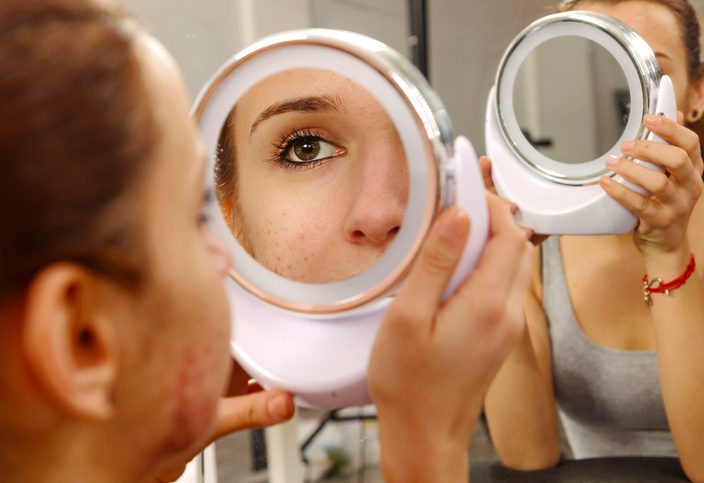 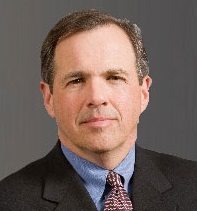 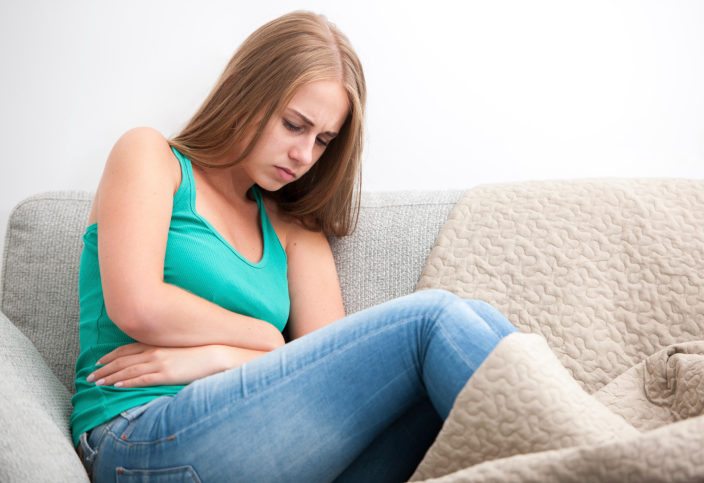