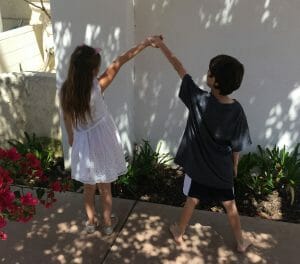 Sarah* and her brother pose together. Their faces aren't shown to protect their identity.
When a California mom Jessica P.* decided to go back to work, she knew she’d need after-school care for her 7-year-old fraternal twins. Since her daughter Sarah* has severe food allergies, it was essential that she have epinephrine with her. It was also important to know that an adult would be available to give her an auto-injector shot, should it be needed.

Sarah and her twin brother, who has no allergies, were excited by the idea of attending the city-run after-school program located right in their school – lots of their friends were in this program that’s known for great activities. Jessica says she broached the subject of Sarah’s epinephrine with the center before she accepted a job. An employee suggested it wouldn’t be a problem.

That turned out to be wrong. When she went to do the enrollment paperwork, Jessica raised the question of the epinephrine auto-injector and that someone would need to administer it if there was an allergic reaction emergency. “I was told that for liability reasons, ‘We don’t allow it; we do not allow any medical devices,’” she says. (Sarah’s auto-injectors were at school in the nurse’s office during the day, but that was locked up at 3 p.m.)

Jessica emailed the director, presuming this was a mistake. “I was told, ‘That is our policy.’ ”

She was floored by the rejection, but that was nothing compared to her daughter’s response. The normally easygoing child “was devastated. She wanted to know why and was angry,” says her mother. “She was pushed away from her friends who were all able to go, and I could not explain to her why. And that was the catalyst for this [legal] action; this was not OK.”

In a food allergy Facebook group, Jessica came across disability attorney Mary Vargas of the Stein & Vargas firm, who also has a son with food allergies. As Jessica posted about her family’s predicament, Vargas responded that this was against the law; Sarah’s rights were being violated. Jessica and her husband decided to take legal action in the summer of 2016, represented by Vargas and Christopher Knauf, Vargas’ California-based co-counsel. Their complaint accused the after-school program of disability discrimination under the Americans with Disabilities Act (ADA) and characterized Sarah’s exclusion from the program as “hurtful, stigmatizing and emotionally painful.”

While not admitting any discrimination or liability, in March 2017 the city agreed to a settlement that would pay $118,000 to the family in legal fees and damages. The damages were assessed as owing to mom Jessica, who ultimately had to quit her job and lost significant income because of the lack of adequate child care, and to Sarah herself. The settlement stipulates that the after-school program will allow epinephrine to be kept for allergic children and that staff will be trained on allergy symptoms and how to use the auto-injector.

Further, the settlement also allots funds for food allergy musician Kyle Dine to perform at Sarah’s school in order to raise awareness of the medical condition among students and staff.

While this settlement is just between two parties, Vargas does see it having broader implications, such as educating those who operate such programs of their legal responsibilities, and that there can be ramifications in denying access because of food allergies. This was also the case with a complaint Vargas filed against a children’s theater company in Massachusetts. That company’s director had repeatedly refused to accommodate a boy with food allergies who needed access to epinephrine, and the U.S. Department of Justice found that the theater group violated the civil rights of both that child and the friend who spoke up for him.

Vargas says the California legal action is important as well because the financial settlement was made public and lawyers often ask what kind of compensation this type of case is worth. “It helps to establish that, yes, there are damages for this kind of discrimination,” she says.

The attorney says Sarah’s whole family was put in an untenable situation: the girl was excluded from the program, which meant her brother also couldn’t go; their older sister took on much of the child care for a time, which caused her to miss activities; and their mother ultimately had to quit a new job and couldn’t find another that would allow her to pick up the children by 3 p.m.

But Jessica did not feel safe leaving her daughter, who has severe allergies to peanuts, tree nuts and sesame and has experienced anaphylaxis, without epinephrine access at the center until 6 p.m. “The program had said all they would be willing to do would be to call 911 in the event of an allergic reaction,” notes Vargas. “There would otherwise be no access to the epinephrine.”

Jessica feels that by saying Sarah couldn’t attend with her epinephrine, it was the equivalent of saying a child in a wheelchair could join the program, but only if the wheelchair was left at home. She thinks the settlement “is going to have a trickle-down effect. Others centers are going to see this and they’re going to know – you cannot do this to children, to parents, to families. It affected us all in a huge way.”

* Names of the family members in this story have been changed to protect privacy. 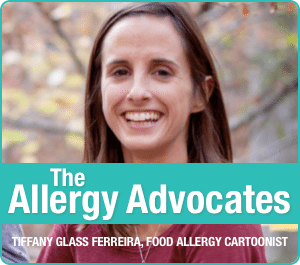