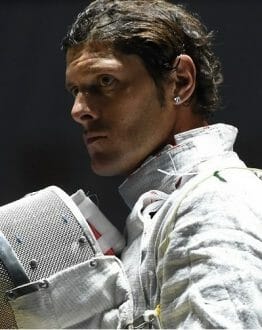 ‘My secret is the same as Superman’s: stay away from kryptonite. If i stay clear of dairy, I am super strong.’ Photo: Augusto Bizzi

Editor’s Note: This article was published shortly before the 2016 Olympic Summer Games in Brazil.

One of the most exciting competitions at the Rio Summer Games will be fencing, and Italy’s Aldo Montano has long been one of the top contenders in the sabre category.

The intense 37-year-old is the third-generation of his family to compete in this sport at the Olympic level, and he’s already succeeded in winning four medals. (He took gold and silver from the Games in Athens in 2004, and the Italians nabbed team bronze in Beijing in 2008, and repeated it in London in 2012.)

Fencing requires superb physical conditioning, the grace of ballet and the mental gymnastics to out-strategize your opponent – which is why the sport is often described as physical chess. But to his training regimen and world travels, Montano adds an additional obstacle – a lifelong dairy allergy. Allergic Living contributor Barbara O’Shea talks with Aldo Montano about both the challenges he’s faced trying to avoid reactions – since he lives about half of his year on the road – and also his passion for sport and the thrill of competition.

Readers may know that you’re a four-time Olympic medalist and a winner in world championships. But they likely weren’t aware that you have a severe dairy allergy. How have you found managing it?

Aldo Montano: It has been challenging. It would be easy to manage an allergy if one had a regular life –at home with your family, my girlfriend and friends who get it. But I travel to compete all over the world about 150 to 200 days a year. That makes at least 150 breakfasts, 150 lunches and 150 dinners eaten out. I have to be very careful and very lucky 450 times a year. Four hundred and forty-nine times everything works perfectly, but there easily is at least one time that gets me –either my fault or someone else’s or just bad luck.

I have ended up at hospitals in half the world – several in Italy, in Russia, Tunisia, Algeria, Bulgaria, Greece, and France. Luckily, in Asia they don’t use much dairy, so I have visited no hospitals there; I do great in Japan and China. I have never had a reaction in the U.S., and I have traveled quite a bit there. I am not sure if I was lucky or there is more awareness.

Is there a common thread to why you’ve had several reactions?

AM: Almost all of my reactions were due to a mixture of ignorance of allergy issues and the difficulty of managing allergens in a restaurant kitchen. If I tell a restaurant chef that if I drink a glass of gasoline, I might get sick and die, of course he would understand.

But that an allergic person might have the same reaction from eating a common food, a substance that doesn’t harm most people, this is counter-intuitive for many people. Then comes cross-contamination. Keeping my allergen away from my dishes is the other problem. This is how it works: if the person you speak with first –the server, the chef, the restaurant owner –understands the issue immediately and seems to get it, it is likely that your dish will be safe. If that first contact doesn’t go smoothly, then chances are your dish will be contaminated.

The places where I have been safest are those where the server or restaurant owner has an allergic family member or close friend. I can see it in their eyes that they understand the seriousness, and that they will do all they can to keep me safe.

The Italian media had photos of you in hospital in November 2015, you’d had an anaphylactic reaction and were wearing a respirator. What happened?

AM: I was out for an appointment that day. I didn’t have my epinephrine kit, which I always carry, but I thought I was going to be OK because I wasn’t planning to eat out. Then my appointment was unexpectedly pushed back and I decided to have lunch. I went into a high-end, small restaurant. It was almost empty, which I always like because I feel the restaurant will pay attention. Both the server and restaurant owner spent time going through the menu with me to pick safe options. I ordered: water, wine and the bread basket were brought to my table. I grabbed a homemade breadstick. Shortly after, my food comes and I start eating.

Suddenly, I feel like I am having a reaction. I tell the server and ask them to go over the order with me again. They say absolutely impossible, it was made for you with special pots and cutlery. Then I ask about the breadsticks. And the owner goes “(expletive), the breadsticks are made with cheese!” Luckily, the hospital was two minutes away and the medical care I received was excellent.

Sadly, I have arrived at the hospital in worse shape. About two years ago, I had a reaction in a restaurant in Milano Marittima [the upscale beach town on the Adriatic Sea]. There was bad traffic, the ER was very busy, and I was in critical condition by the time I arrived. The restaurant staff had been negligent, and my reaction was due to pure ignorance.

How do you communicate the severity of your allergy with restaurants?

AM: I scare them – it is my only weapon – in the hope they will take my allergy seriously. I tell them: ‘If I eat cheese I will die.’

I speak with the chef or he comes out to the table. I try to accommodate restaurants, too. If it is too busy, I won’t eat. I will drink a coffee, I will have a glass of wine and chat with my friends without eating. I also try to order the simplest dishes.

Have you had many dairy reactions?

AM: I have had a reaction every two to three years on average. All of them from dining out, except maybe once when I was a small child at a friend’s birthday party – I ate a safe food that was touching a pizza with cheese.

At what age did your parents know you had a dairy allergy?

AM: From birth. I reacted to the first bite of cheese my grandma had me taste as a baby. All I can do is be prepared, carry epinephrine, and do my best to avoid dairy. I have lived 37 years, I hope to make it another 40.

Any advice for those trying to manage food allergies?

AM: My advice is to not let this allergy define you. It is easy to get scared. I understand the fear of not trusting anyone and not wanting to eat anywhere other than at home. But I have had to figure it out –because my life choice is to compete and I have to travel. I don’t have a personal chef with a portable barbecue. I wish!

I took risks, and was a fool in certain circumstances. What I have learned is to be ever more careful. My advice is don’t tighten the circle, but make it wider with all due precautions. Whenever I book a hotel, for instance, I pick it based on proximity to the hospital. Some people look for a sea view –I look for hospitals. Also, I never eat anything [purchased] on planes, even on 24-hour trips, I would rather eat a dry sandwich and drink water. 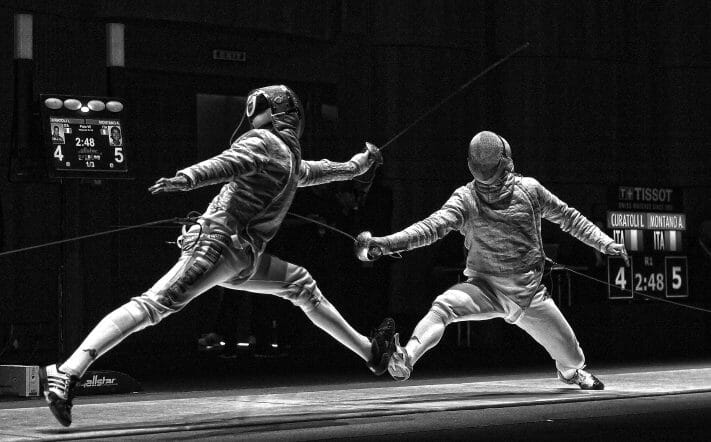 We noticed a photo when you were competing in Boston with your team having a lobster dinner. Do you enjoy a good meal?

AM: Absolutely. And we shouldn’t lose that. We allergic people have a medical condition, but can have a great life, as long as we take precautions.

What’s the secret to staying at the top of your game at age 37?

AM: My secret is the same as Superman’s: stay away from kryptonite. If I stay clear of dairy, I am super strong. My secret is to stay away from it, and be positive. Be careful and take precautions. If there is an accident, be prepared. Always carry epinephrine. Prevent as much as possible.

What does it mean to you to go to the Olympics?

AM: Heading to the Olympics again is a great challenge. I feel the same as in 2002 and 2003. My life makes me feel alive. I still have the same desire to win. I certainly have evolved, my sport life has changed, but I still feel the same. I want to win. My spirit is bold. I love life and train for an objective.

I take great satisfaction in winning: I’m badass, combative. I like to always be at the center of attention in my sporting life. It makes me strong, it stimulates me. I can’t imagine myself in any other way.

You have a big fan base in Italy. Do your fans motivate you?

AM: Fencing doesn’t shine enough of its own light. There is a good Olympic spotlight, but then we live in the shadows for four years. But my fan base has built over the years, and is very close to me. They motivate me. I give them a good example, something to make them proud. This is a wonderful sensation. 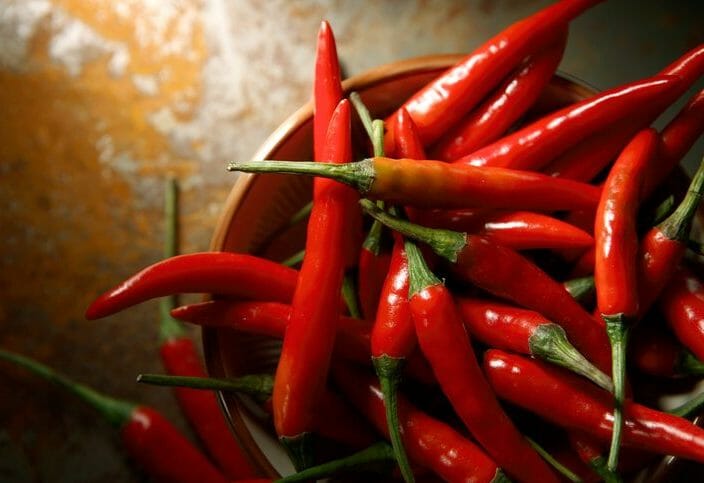 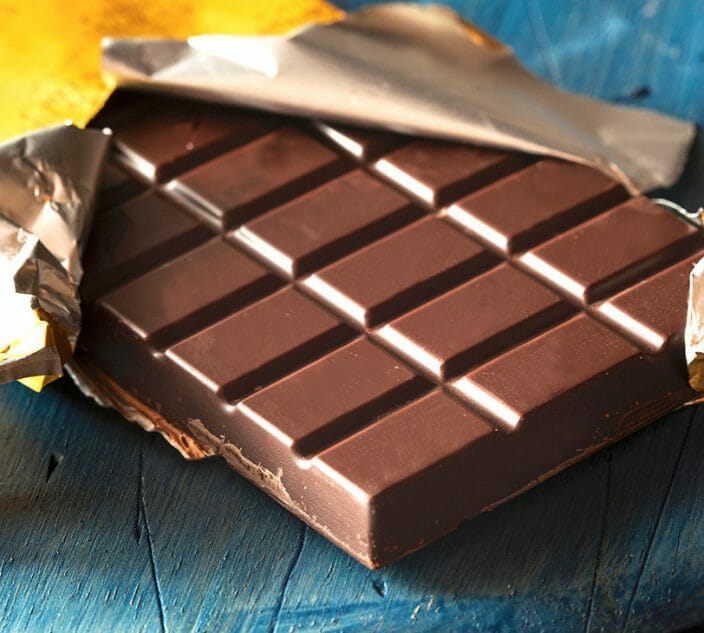