Home Peanut Patch Trial: My Allergic Son and I Brave Anxiety and the Unknown 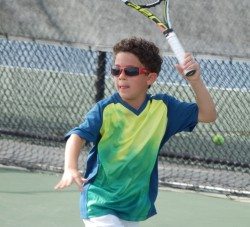 Josh Mandelbaum on the tennis court.

We were at a tennis tournament (our first one) in Florida. My son, Josh, then 8, was a late entry and everything about this day was rushed. The matches were outside, and his first one was to start at 8 am. At 10:30, following a nice win by Josh, we made our way indoors to where all the players and parents were congregating around a large screen TV and watching professional tennis. We had an hour before our next match and it seemed like a good place to sit down and relax, until I saw it –the HUGE bowl filled with peanut M&M’s.

For most people, this would not be a problem, except Josh has a very severe peanut allergy. Suddenly, lots of messy little hands were grabbing the candies. In my rushed exit in the morning, I had forgotten to bring wipes. To say I was panicked by a room awash in peanut residue would be an understatement. I grabbed Josh, and we drove to the nearest market, purchased wipes, and sat in our parked car until his next match. I was like a hawk all day, monitoring him shaking hands with players, and asking every opponent to use our wipes.

Since it was our first tournament, I had never thought of the snack-and-handshake element to tennis, and it was an awakening to me of the type of awareness and vigilance that I would need to protect my son.

I didn’t relish the idea of becoming the unofficial tournament food monitor, but there didn’t appear to be much choice. So when a few months later, in September of 2013, we received a call from New York’s Mount Sinai Hospital, and Josh was offered a place in the Viaskin peanut patch study, we jumped at the chance. Studies were scarce, and it felt like we had won the lottery. 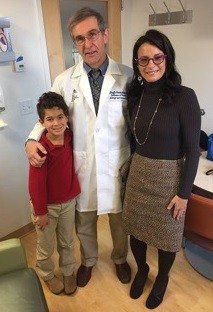 People often ask me what it’s like to take part in such a study. It has turned out to be a fascinating and positive experience – but also one that has tested both Josh’s and my courage more that we could have ever known.

First off, Josh still had to qualify for the patch study by “failing” a double-blinded oral food challenge to gradually increasing “doses” of actual peanut protein. (Physically reacting to your allergen proves your allergy). Since his blood and skin test results were always considered too high for a food challenge, the thought of him eating peanuts –his poison –was terrifying. Josh also experienced high anxiety levels, and he kept asking me: How could he eat peanuts and not die?

Fortunately, the challenge itself did not live up to our anxiety level. It turns out, that when “failure” to the challenge test is expected, the process is slow, and begins with very tiny amounts of the allergen. The food challenge immediately ceased at the onset of symptoms –and Josh had a reaction to less than 1/8th of one peanut (44 milligrams). We went on to enroll in the study, but faced another layer of tension: We would not know if he was going to receive the real patch, or a placebo, for the first year.

All the same, we were off on our peanut patch journey. It began in the hospital, with Josh wearing the patch for just a few hours. We were sent home with a schedule to slowly increase the amount of time the patch was worn each day, until we finally reached a full day application. It is an unnerving process, having to apply what is essentially your child’s poison to his skin. I had read all the published data, which revealed only local skin reactions, and no systemic ones, yet I was still filled with trepidation. This was a yet-to-be approved treatment: what if there were side effects?

From left: Josh in hospital for tests; skin hives from previous patches; wearing his proteins daily.

For the first few months, I sat outside every tennis lesson and worried that exercise could induce a reaction. We also had a few scares in the beginning, like when Josh was suddenly vomiting over a three-hour period. Both our older children succumbed to the stomach flu the week before, and this was the most likely explanation for their brother’s painful rounds over the toilet bowl. But in the back of your mind, you still know that a symptom of anaphylaxis is vomiting, and he is wearing his poison after all. These thoughts lead to a sleepless night with him next to me, and a fistful of EpiPens within reach. As we became more confident in the safety of the patch, all these worries gradually faded. For the most part, besides a red itchy hive at the patch site, the patch wove its way into our daily routine.

Our first year on the patch passed quickly and soon it was time for our next double-blinded food challenge. I was still anxious, but with confidence in the doctors at Mount Sinai, and one challenge under our belts, my level of anxiety was not nearly as high this time. Josh easily tolerated about half a peanut’s worth of peanut flour mixed into applesauce, but did need epinephrine when he reached a dose of about one and three-quarters peanuts (444 mg). Still, Josh had reached the point of trying 10 times more peanut than in that original “failed” challenge. He was quickly treated after he vomited, went pale and said it felt like someone was strangling him. We were then informed that he was on the real patch, not the placebo. 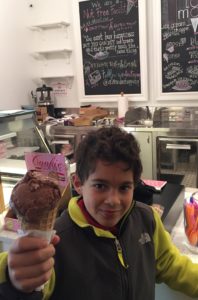 Once he had the epinephrine, his color instantly returned, and so did his cheery demeanor. We were so happy that his tolerance had increased. We made plans to visit our favorite “nut free” ice cream parlor to celebrate officially. It actually turned out to be beneficial that he went into anaphylaxis because Josh had not had an anaphylactic reaction since he was 2 years old, and did not remember what it felt like. The unknown of what a reaction feels like was scary for him. He not only knows what it feels like now, he also saw how quickly the epinephrine saved him, and has become more vigilant about carrying it as a result.

We have what may be final challenge this May, and Josh is excited this year to eat the peanuts in applesauce concoction. A few weeks ago, at Mount Sinai as part of his study, he was skin-tested for peanut again. We have done the skin test several times since the start of the study and it has been pretty consistent. This time, however, the resulting hive from a prick of peanut extract was significantly smaller.

The treatment has already made a big difference in our lives. With Josh wearing peanut proteins daily, accidental contact is not a big concern anymore. Judging from his second peanut challenge, he also appears to have more protection against accidental ingestion. By being in a study, Josh also feels he is doing something that may one day make life easier for other kids with a peanut allergy.

Our biggest concern now is what happens when Josh has to stop wearing the patch in mid-May. Will the protection last? As with each step of this journey, the answer is unknown.

Like other parents and children that participate in studies, we are pioneers and each step is into unmapped territory. The patch data released so far is encouraging and our family has tremendous optimism for what lies ahead. It is the hope that Josh will soon worry more about how to beat his opponent on the tennis court, rather than what that opponent just ate as a snack.

Lianne Mandelbaum is a food allergy advocate, founder of NoNutTraveler.com, and a contributor to HuffingtonPost.com. 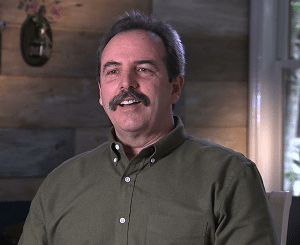 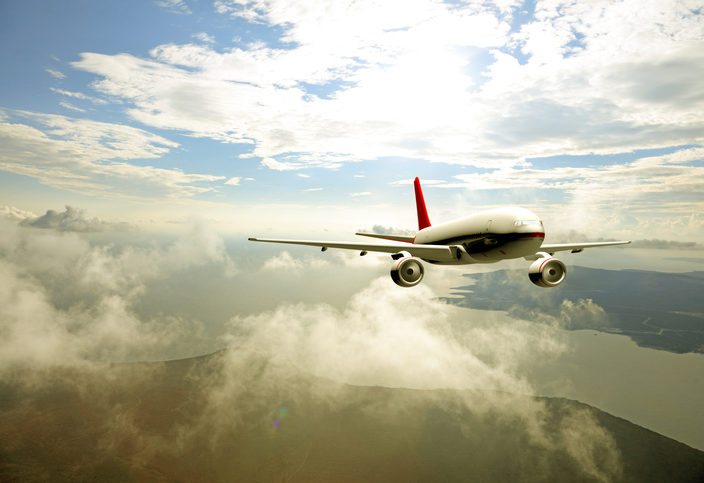