Home To My Brave Celiac Friend on Mother’s Day 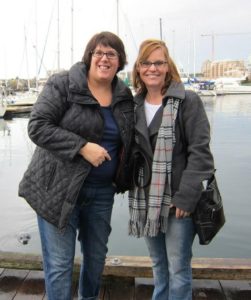 Michelle Nel with her friend Micheline.
This Mother’s Day story is a readers’ favorite. First published in May, 2012, it has an update at the end.


I’M NOT a big fan of amusement park rides: the kiddie train or a quick spin on the carousel horse is about my speed. On the day our son had his first anaphylactic reaction, I walked away from the emergency room in a daze.

It seemed we had been handed complimentary lifetime passes on the ultimate rollercoaster, with an epinephrine auto-injector prescription as our ticket stub. And the kicker was that boarding wasn’t even optional; this ride was in motion – we’d just completed our first loop-de-loop.

I felt blindsided by my son’s new food allergy diagnosis and overwhelmed by the realization that the world as I knew it had just changed. Yet, this was not at all the case for my friend Micheline on the day she was diagnosed with celiac disease.

In fact, her experience was completely the opposite. Micheline celebrated receiving her celiac ‘ticket’ with utter gratitude for the gluten-free life that loomed ahead. She didn’t even wait for that train to come to a full stop before hopping on.

Why, you’ll be wondering, would anyone want to join a club whose members have to read the ingredients on every food package, spend countless hours researching safe foods and scour grocery aisles for “free-from” food products.

Why would Micheline, a busy mom of two who works full-time, look forward to endless hours preparing that additional “safe” meal just for herself?

Let’s just say that Micheline’s story proves how much life comes down to perspective.

You see, in addition to being a mother, a navy wife, a nurse and a cherished friend, Micheline is a cancer survivor. A routine annual mammogram first detected the cancer she developed in both breasts. I will never forget sitting on her front steps as she shared the news.

We held hands, we wept, we clung to each other. Her fears were not for herself but for how her two children – Amanda (then 10) and Matthew (then 5) – would navigate life without their mother.

To complicate matters, her cancer diagnosis coincided with a transfer for her family. Their home in Ottawa, Ontario had been sold weeks before, and there was no option but to proceed with the imminent move. Just 48 hours after having sat together on her front steps, we shared a very tearful goodbye.

Once in Victoria, British Columbia, Micheline underwent a double radical mastectomy followed by chemotherapy. Almost 3,000 miles (5,000 kilometres) now divided Micheline from the support of extended family and friends. With her husband and children by her side, Micheline bravely put up the fight of her life.

She put on the biggest pair of boots she could find and proceeded to kick the big ‘C’ to the curb.

She faced surgery, surgical complications and chemotherapy – all with the fiercest determination and an astonishing ability to see humor in everything. Our phone conversations were loud, long and full of laughter. I’d often hang up feeling better, wondering how my friend had ended up comforting me when my intention had been to console her.

Just two weeks after her last chemotherapy treatment, Micheline chose to return to work. This was an important part of her healing process; keeping life as normal as possible helped Micheline to stay focused and strong. ‘Normal’ during this time of recovery included returning to work as a nurse, attending to as many parenting and household responsibilities as she could, and her situation was compounded by her husband having to leave on a five-month military deployment.

Just when her health concerns should have subsided, new ones arose.

In retrospect, Micheline now recognizes the progression of celiac disease symptoms over her adult life. Yet it wasn’t until her health began to decline significantly – with bouts of frequent and severe abdominal pain, bloating, skin rashes and irritable bowel – that these unexplained symptoms raised alarm bells.

During an agonizing episode in which Micheline was admitted to hospital, doctors did further testing including a gastroscope. Across a country, friends held their breath and fingers were crossed as we anxiously awaited the biopsy results. I finally received ‘the’ call. “Celiac, it’s just celiac,” announced Micheline. “Not cancer, not anything else … JUST celiac!!”

For Micheline this would be a (gluten-free) cake walk. Why? Because she knew that celiac disease was manageable; celiac was livable.

In the days and weeks that followed, I flooded her inbox with gluten-free recipes, products and links to all the best and most reputable sites along, of course, with a subscription to Allergic Living magazine.

It took me a long time to adjust to the food allergy rollercoaster ride. There have been times when I sure wished there was an emergency brake to pull to get off.

But not Micheline, she got on, threw her hands into the air, screamed with laughter and continues to enjoy the ride. This Mother’s Day, I’d like to thank Micheline for teaching me that there is so much to be grateful for in a peanut-free, egg-free, soy-free and gluten-free life! It is still a very good life. At the end of the day, as she knows better than anyone, it’s all about perspective. 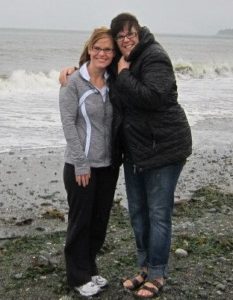 Update from the writer, Michelle Nel:

Not long after this article was published, my dear friend Micheline was diagnosed with breast cancer for the second time, ironically, three years to the day of her original diagnosis. Mission text support was re-implemented. We would message as she was driven to appointments and during treatments.

On the good days, we would tease and talk, on the low days, I would send love and listen. With ferocity, grace and dignity, Micheline battled this second diagnosis, and was able to kick cancer to the curb yet again.

One of the most poignant moments of my life was getting to visit Micheline on the West Coast; a meeting neither of us had been able to count on. But she had made it, she was in recovery, and there were no emoticons or descriptions grand enough to express how I felt. After getting off the plane with my daughter, I scanned the crowd outside the Victoria, B.C. airport terminal. I saw her, she saw me. We clutched each other and wept.

As another Mother’s Day approaches, I wish Micheline love, peace and the strength to overcome any and all obstacles that come her way. And may the same hold true for the mothers and friends whom you cherish.

Related: What is celiac disease? 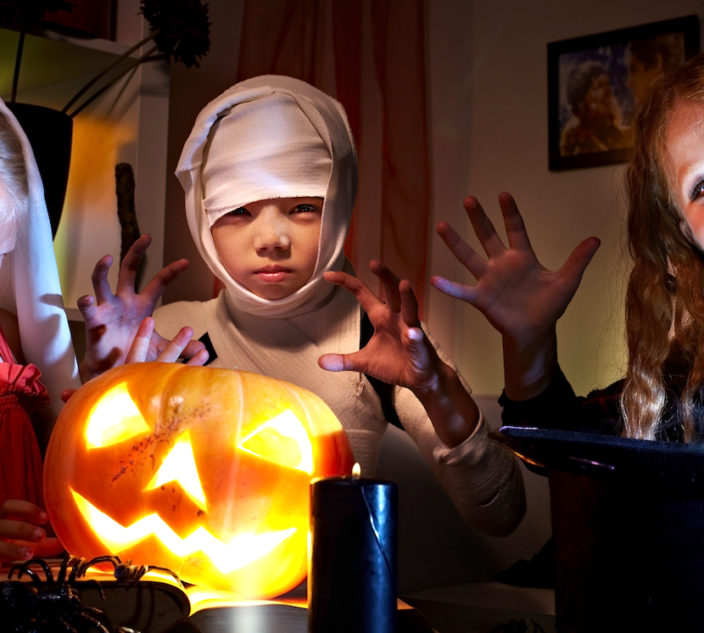 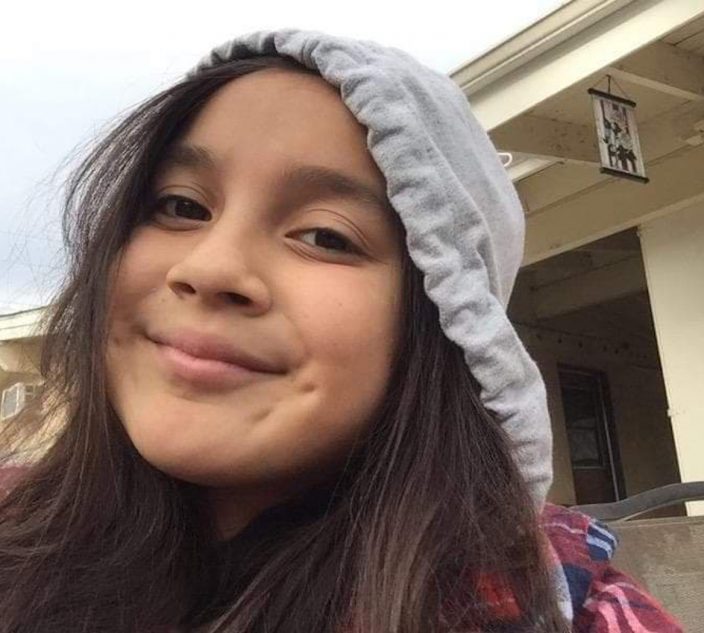 After Daughter’s Fatal Reaction to Toothpaste, Mother Calls for Caution 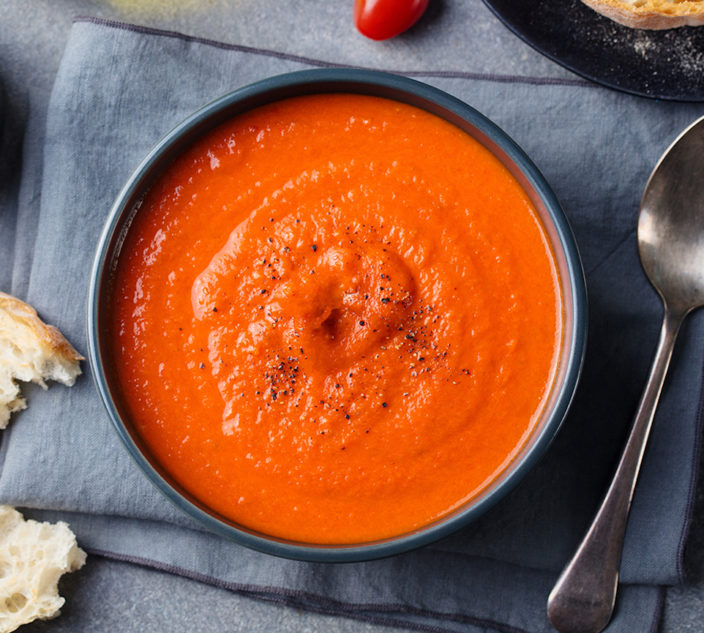