Home Ask the Experts Is Someone With Peanut Allergy More Likely to Develop Sesame Seed Allergy? 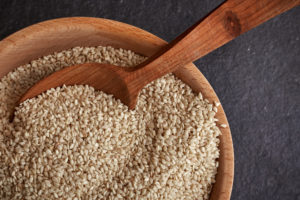 Q: Does being allergic to peanut make a person more susceptible to a seed allergy? My peanut-allergic daughter recently reacted to sesame, and now has been diagnosed with that as an allergy, too. Should we be concerned about other seeds as well?

Dr. Sicherer: Having a peanut allergy may increase the risk of also having a sesame allergy. Studies suggest that segments of proteins in peanut and sesame have some similarities. However, observing sesame allergy among children with peanut allergy may have more to do with a person’s general disposition to develop allergy, rather than the minor similarities between the foods.

For example, it is more common to have peanut allergy along with egg allergy than alongside sesame allergy, but certainly egg and peanut have no proteins in common.

In the United States and Canada, rates of peanut allergy in the general population are about 10 times higher than rates of sesame allergy, and most people allergic to peanut do tolerate sesame.

In U.S. studies of referral populations who have high rates of various allergic conditions, sesame allergy was reported in 6 to 13 percent of those with peanut allergy.

However, children in these studies typically have many other allergic problems, such as serious eczema, or multiple food allergies. In one study of a referral population, having both peanut and tree nut allergies was associated with higher percent risk of a sesame allergy.

It’s important to note for readers that, if a child with peanut allergy already tolerates sesame, there is no reason to avoid sesame. Also, since allergy tests for sesame are notoriously often positive despite a child being able to eat sesame without symptoms, a doctor-supervised feeding test may be needed.

Other seed allergies (poppy, mustard, etc.) are less common than sesame and may also not be directly related to sesame or peanut allergy.