Home Ask the Experts Advice on Living with Wasp Allergy 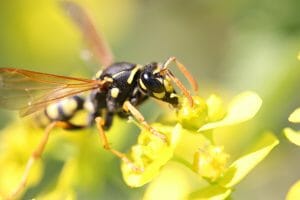 Q. I was stung by a wasp last year, with no reaction. About three weeks later I was stung again and my lips and ears swelled, as did my arm where I was stung. I’ve been told I’m anaphylactic now, and I’m afraid when I’m outside. How do I go on living a normal life?

I would recommend that you see an allergist to find out whether immunotherapy is an option for you. More importantly, you should carry an epinephrine auto-injector and know how to use it to treat a reaction.

While severe reactions to bees and wasps can be very scary, it is important that you take control with steps to reduce the chance of being stung:

‚Ä¢ Bees and wasps are attracted to odors and bright colors in the environment. Avoid looking or smelling like a flower. Do not use perfume, cologne, or scented soaps and don’t wear brightly colored or patterned clothing.

‚Ä¢ Avoid going barefoot while outside, especially in clover and blooming ground covers.

‚Ä¢ If a bee or wasp lands on your skin, remain calm. The insect will eventually leave on its own. If you don’t want to wait for it to fly off, gently and slowly brush it away with a piece of paper.

‚Ä¢ When swimming in pools, watch out for and remove bees or wasps trapped on the surface of the water.

As well, stinging incidents often occur when nests are disturbed. If you see insects flying to and from a place, avoid it. If you are going to be in an area where disturbing a nest is possible, such as an old building or in the woods, wear long pants and a long-sleeved shirt.

Dr. Wade Watson is a pediatric allergist and Professor of Pediatrics at Dalhousie University. He is also the head of the Division of Allergy at the IWK Health Centre in Halifax.