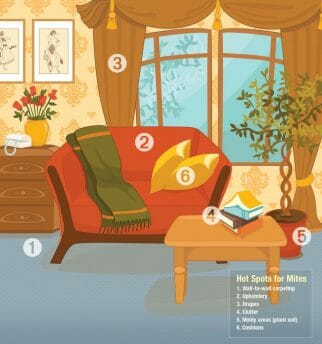 They prowl our beds and sofas, invisible to us but hugely allergenic. Here’s the lowdown on dust mites, and what you can do to protect your family.

THEY are tiny enough that you can’t even see them with the naked eye – but as millions of people around the world can attest, dust mites pack a big wallop when it comes to allergies and asthma. In fact, it’s estimated that 84 percent of U.S. homes contain dust mite allergen, and it’s one of the most common and potent allergy and asthma triggers.

So what exactly are these little freeloaders? Why do they love us so much? How come they make us so miserable? And most importantly, which ways of getting rid of them actually work? You might be surprised.

Some medical websites claim that dust mites are so tiny, there can be as many as 40,000 of them in a single speck of dust. But that’s far from the truth, according to Dr. Jay Portnoy, director of allergy, asthma and immunology at Children’s Mercy Hospital and professor of medicine at the University of Missouri in Kansas. Portnoy, who co-authored extensive guidelines for physicians who treat dust mite allergies, says the mites are small, but they are almost the same size as many dust particles. In fact, they are just outside our range of vision so they can be seen with even the most basic microscope.

While they look like they could be distant relatives of the beetle, dust mites are not actually insects; they are arachnids with close biological ties to spiders, crabs and shrimp. But unlike their web-building and seafaring cousins, dust mites’ favorite food is skin scales, which is why they flock to mattresses, carpets and upholstered furniture where people’s dead skin tends to accumulate. (Their scientific name is Dermatophagoides, which means “skin eating.”)

Dust mites live roughly two to four months, and are hungry for moisture; in fact, they need a steady supply in order to survive. By weight, dust mites are roughly 75 percent water, and they can’t drink, so they rely entirely on absorbing moisture from the environment around them through glands at the base of their front legs. That’s why in dry climates, dust mites are almost nowhere to be found – even in dusty spaces.

“They’re basically bags of water with legs, so they don’t tolerate drying out,” says Portnoy, who worked with 22 other top experts to produce Environmental Assessment and Exposure Control: A Practice Parameter, Dust Mites for physicians in 2013. “So it can be very dusty in Denver, but they don’t have any dust mites because it’s persistently so dry that dust mites don’t survive. In Florida, it’s so humid that you can’t get rid of them. They’re everywhere.”

In most climates, mite populations increase in summer, when humidity is high, and peak in the fall – which experts suspect is part of the reason asthma rates are so high at that time of year. They begin to taper off in winter when it’s colder and drier. By late winter and early spring, populations are usually at their lowest.

So What’s the Problem?

They also poop a lot – roughly 20 times a day – and those fecal pellets are the major source of the powerful allergens they produce. The tiny pellets are just the right size to become easily airborne, too, so even walking across a carpet, sitting on a sofa, or moving a pillow can send them flying – and into people’s airways. Once the pellets get kicked up, they don’t settle back down for 15 to 30 minutes.

“When mites eat skin cells, they have enzymes they use to digest them. And when the little fecal pellets come out, the enzymes are in those pellets and they serve as very potent allergens,” says Portnoy. “And when you inhale it’s just the right size to get deep into the lungs and cause an asthma attack.”

But the little pests aren’t only causing problems with the air we breathe; in rare instances they have also stirred up trouble with our food. Dust mites and other types of allergen-producing mites can contaminate grain flour, and systemic reactions from hives to anaphylaxis have been reported in dust mite-allergic people after eating pancakes, grits, beignets and other grain-containing foods.

The allergens are so stable that cooking doesn’t help; as a result, Portnoy recommends that people with mite allergies keep their flour in sealed plastic containers – and that people who experience allergic reactions to grain flour, but test negative for allergy to the grain, should also be tested for allergy to mites.

There’s also an intriguing shellfish link: tropomyosin, one of the major allergenic proteins in dust mites, is also present in shrimp, lobster and crab. A few studies suggest an allergy to dust mites may make some individuals more susceptible to reacting to a crustacean dinner. But the connection is unclear, and the new guidelines don’t recommend avoiding shellfish simply because of a dust mite allergy. Allergists point out that dust mite allergy is far more common than shellfish allergy, so one does not necessarily lead to the other. 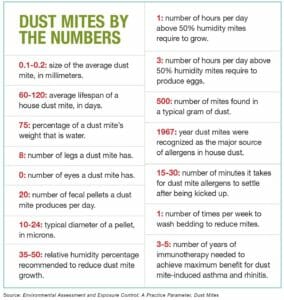 How to Get Rid of Them

If dust mites need moisture, and they can’t survive in dry environments, just pick up a portable dehumidifier or two and your problem will be solved, right? Not true, says Portnoy, who notes studies have found that the stand-alone dehumidifiers aren’t up to the task, because as soon as you open the door to a room where the dehumidifier is running, moisture moves in, and mites require very little to sustain themselves. Even in a fully dehumidified house, having a shower or cooking without a vent fan running can introduce more than enough moisture to sustain dust mites for days.

So in the human versus mite fight, what actually works? Portnoy says a whole house dehumidification system definitely makes a difference; but there are other key ways to significantly reduce the dust mite population. Buying a hygrometer, a relatively inexpensive tool that measures humidity, is a good start, because then you’ll know just how much you need to dry out. (Below 50 percent humidity, few mites can survive.)

The pesky arachnids love warm, moist environments that come with limitless room service – skin cells – so first and foremost, people with allergies should cover their mattresses, box springs and pillows using allergy encasings made from fabric that’s tightly woven. Mites can make their way through the more loosely woven or non-woven protectors, so it’s important to check the manufacturers’ fine print.

Sheets, pillowcases and comforters must be washed regularly – but the guidelines give contrary advice to a long-held belief about water temperature, they say you don’t necessarily need to wash in piping hot water, because the majority of the mites die from drowning, not heat. The difference is so negligible, in fact, that the guidelines say the scalding risk of very hot water outweighs the potential mite-killing benefits. (It should be noted that some studies favor very hot water as a means of killing dust mites’ eggs, which are hardier.)

But mites don’t like it hot, either: a dryer at high heat will kill them off, as will a stint in the freezer – so it’s a good idea to give kids’ plush toys a tumble, or a little chill out time. (If you put them in the freezer, however, Portnoy advises first putting them in a sealed plastic bag so they don’t get damp when they thaw.)

In the rest of the home, the key is to avoid giving the ubiquitous creatures a comfortable place to set up shop. They can-not live on hard or non-porous surfaces, so hard surface flooring such as wood or tile is ideal, as is furniture made from wood or covered in leather.

“When you sit down on an old couch you’re getting a big puff of dust up into your face. Most people don’t sleep on their upholstered furniture, so the bed is the biggest problem, because you’re spending eight hours a day there. But if you sit in front of the TV on a chair that’s upholstered, you’re getting that exposure, too.”

A must-have for every home where there are allergies and asthma, says Portnoy, is a vacuum with a HEPA filter; and if you have carpeting, a vacuum with a beater bar that can kick the mites, and their nasty pellets, out of the fibers and into the cleaner.

“Carpeting provides shelter and it also serves as a reservoir – so even if you get rid of the mites, the reservoir will continue to release the allergens,” says Portnoy He views vacuuming as so essential that his clinic has donated vacuums to some families in need.

“You need to use a high-efficiency vacuum cleaner, such as a cyclonic vacuum or one with a HEPA filter. If the vacuum has a low-efficiency filter it serves as an allergen dispersal service. It goes in and comes right about out again. It doesn’t help.”

There is good news, especially for new parents: Portnoy and his expert colleagues think that dust mite allergies can be prevented, or at least significantly reduced, if parents do their best to prevent dust mite exposure, especially during the first six months of life.

And if you already are allergic to dust mites, allergy shots can significantly reduce symptoms for many years at a time.

Portnoy acknowledges that minimizing exposure through dust mite covers, a good vacuum cleaner, bare floors and non-porous furniture might hurt the pocketbook at first – but he and his colleagues did a cost analysis and found that skipping those fixes means bigger bucks in the long run, because people end up buying more pricey antihistamines and asthma medications.

“Medicine is something you buy all the time, so it’s a continuing cost, whereas many of the interventions are just changing your environment one time and then you get an ongoing benefit,” he says. “There may be a greater upfront cost to some of the environmental interventions, but in the long term you’re better off doing that than taking medicine all the time and being sick.”

Portnoy’s final words of advice? “Pay attention to your environment. It makes a difference.”

Have a healthy home comment? Write to: [email protected] 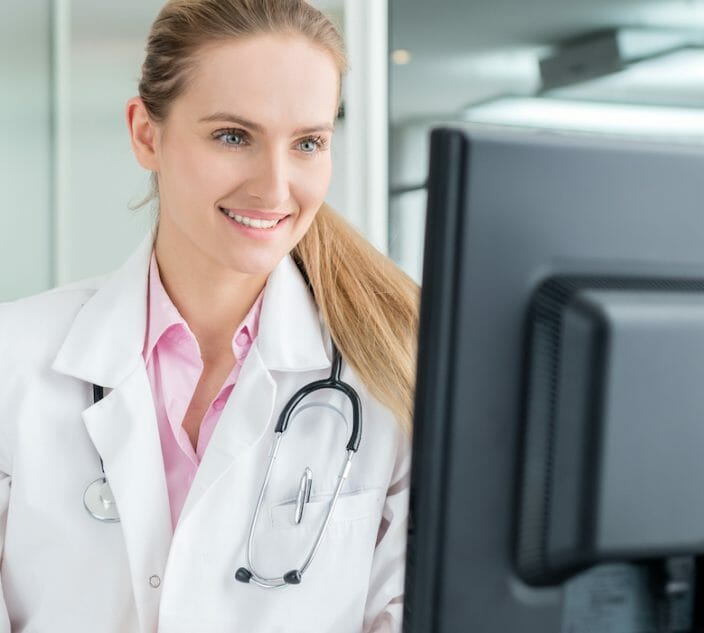