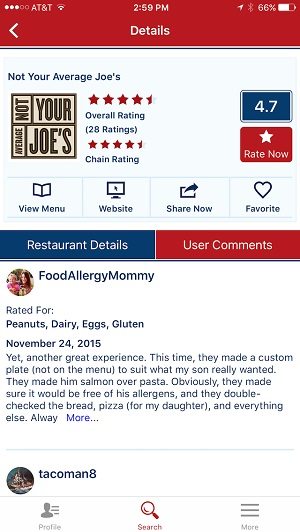 Allergy Eats on an iPhone

Allergy Eats, the website and smartphone app that allows users to search for and rate restaurants in the U.S. for “friendliness” to food allergies and celiac disease, has gained a solid reputation since 2010 as a helpful dining out tool. Now that tool has received a major overhaul, with a newly designed interface for both the app and site that complements more substantive changes under the hood for how the ratings searches work, and how you can share places you like.

New Allergy Eats features include an updated visual feel and better navigation; increased flexibility for users to customize search results to suit their specific allergens; and additional social media functions both within the app (allowing users to grade each other’s ratings) and outside of it (making it easier to share reviews and restaurants on Facebook, Twitter, etc.).

The new version of the user-driven app gives people the ability to rate restaurants overall out of five stars, with ratings linked solely to an establishment’s ability to accommodate customers with food allergy and/or celiac disease. That takes into account many factors: menu, staff communications, kitchen protocols and cross-contamination policies. Of course, for commenting on the quality/variety of food, service and specifics of allergy accommodations, the ratings page for each restaurant also includes a comments section.

Users can input their own allergens from a list that includes: peanuts, tree nuts, dairy, eggs, wheat, fish, shellfish, sesame, soy and gluten, as well as less common allergens. The app then shows ratings in keeping with the specific allergens and, depending on your profile, ranks restaurants higher according to their ability to accommodate. Users can also “follow” other users with similar allergen profiles, adding another way to find places that can meet specific diet needs.

Allergy Eats has been the leader among allergy review apps. But the owners’ hope is that with the relaunch and its new customization features, and as Allergy Eats continues to grow its network of users, the community of users will become more diverse, catering to a wider array of allergy needs, thus making it increasingly useful as a database of people’s individual dietary restrictions.

“We started in Boston, so that’s our strongest market, but we’ve strengthened all up and down the east coast and west toward Chicago and St. Louis,” Paul Antico, Allergy Eats founder and CEO, told Allergic Living.

He says the new look and working features of the app and website come after the company surveyed “just shy of 2,000 food-allergic individuals” in an effort to meet users’ biggest concerns for what the app was missing.

Next: Read our Allergy Eats review